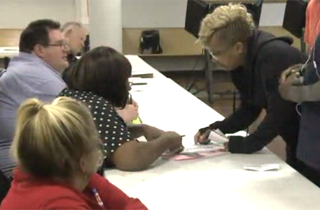 Despite a raging thunderstorm that threatened to minimize turnout, nearly a third of the registered voters in Ferguson, Mo. voted in yesterday’s municipal elections and elected two black members to the six-member city council.

The results of this election are game-chaning for the city, thrust into the spotlight after the death of Michael Brown turned it into the center of a nationwide civil rights debate: Mashable reports that in last year’s April mayoral election, only 12% of voters turned out, while this year, roughly 29% of registered voters cast ballots.

In addition, the two black councilmembers — Wesley Bell and Ella Jones — join a third black councilmember on a council that previously had five white members. (Brian Fletcher, a white man and Ferguson’s former mayor, was also elected.) This is a big step in getting the council to accurately reflect the demographics of Ferguson, which is nearly two-thirds black but was represented by an 83% white council. (The Department of Justice called out this racial disparity in a scathing report examining the structural racism in the city’s government.)

But despite the new racial makeup of the city council — which will have plenty of hiring decisions to make in the light of the DOJ report — civil activists are wary about the new councilmembers. The St. Louis Post-Dispatch points out that Bell is also a municipal judge in nearby Velda City, and “St. Louis County’s municipal courts, which some described as modern-day debtors prisons, have been cited as major contributor to the protests.”