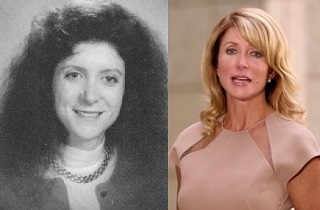 While liberals herald State Senator Wendy Davis as the second coming of the Texas Democratic Party, and the abortion rights stand she took catches fire at the Texas State House in Austin, her opponents are hard at work digging up devastating dirt on her. A new website called “The Real Wendy Davis” has exposed Davis as the first woman ever to look hotter than her 1991 yearbook photo, with the possible exception of every woman ever. You might ask, is that all the obviously-unfamiliar-with-yearbook-photography folks at “The Real Wendy Davis” got? The answer is yes, that is literally all they’ve got.

You might be tempted to wonder what Sen. Davis’ relative hotness has to do with her effectiveness as a legislator, but you would be missing the point. Let’s be real for a minute here, politicians are judged, at least in part, on their appearance, as Governor Chris Christie will attest. It’s not fair, but that’s just how it is. If feminists are going to go around whining about people marginalizing powerful women by focusing on their looks, the theory goes, then how dare they lift a pinkie in service to their appearance?

In Wendy Davis’ case, her crime is much worse, because she has hottened herself up so much, the distractingly hot results have defied science, and spawned an entire blog devoted to her impossible hotness. TRWD begins with some comparison shots of two men who, if you ask me, have gotten better-looking with age, if only marginally so. Glenn Reynolds has a better haircut, posture, and wardrobe now than he did in that shot from the liner notes of a Toto album, and Barack Obama is leaner and meaner now than in his Members Only phase.

The blog then sets their sights on Sen. Davis:

Now consider Texas state Senator Wendy R. Davis, who has recently been in the news being touted (however dubiously) as the Left’s technologically enhanced “feminist superhero.” She is 50 years old. Yet, unlike Reynolds and Obama, but like Mac Davis, it appears she gets better looking each day. If she has not found the Fountain of Youth, at minimum she has found very talented plastic surgeons and image consultants who have readied her for her closeup.

Somehow, during the past two decades she has been transformed from a frumpy, pleasant looking but plain-faced, flat-chested brunette with thick, messy hair, into a buxom blonde with excellent facial features and sleek, long, perfectly coiffed hair, like she stepped straight out of Vogue.

Feminist scold Rebecca Schoenkopf points out that “in addition to getting her hair did, it is POSSIBLE that Wendy Davis gets regular facials! FROM AN ESTHETICIAN, PERVS,” whatever that means. The only thing this blog post made me wonder was how they could tell Wendy Davis was “flat-chested”  from a neck-up portrait. Judging by the 1950’s adjectives at play here, and the Dennis Miller-hip Mac Davis reference, I’d say the author ought to worry less about Wendy Davis’ chest, and more about fixing the bum Flux Capacitor on his DeLorean.

Like many things about conservatives, I really don’t get this, but if they think they can derail Wendy Davis by pointing out how painfully, distractingly, physics-defyingly hot she is, I’m happy to do my part. In the interest of bipartisanship, here’s a little photo essay I like to call “Wendy Davis For Governor.”