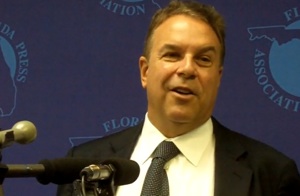 Yesterday news broke that Democratic Senate hopeful Jeff Greene promised to sue St. Petersburg Times if they didn’t run a retraction over an article and opinion piece that Greene’s lawyer asserts misreported the facts. Mediaite has learned exclusively that the day after this news broke, Greene’s lawyer has sent another letter to St. Pete for alleged journalistic misconduct — this time over a report the Greene’s lawyer says inaccurately links Mike Tyson’s drug-use to Greene’s boat, which The Times dubbed as The Love Boat..

At issue is a Times story about Greene’s real estate transactions that ran over the weekend, and a subsequent editorial that delved into a project at the periphery of Death Valley. It’s a lengthy story and one that is better read undistilled. Greene’s own letter, filed by lawyer L. Lin Wood — who was involved in the JonBenet Ramsey case — is linked in a PDF.

The letter alleges that the paper had dozens of documents that it ignored and that it misreported facts. I’d recommend reading the story, then reading the letter.

But the letter demands a retraction of “equal” size to the original story in the Aug. 15 edition of the paper, or a lawsuit will follow. As I understand it, under Florida libel laws, the notice demanding a retraction is the first step toward a lawsuit, like a notice of claim.

From the letter: “The Times reporting falsely accuses an extremely successful businessman and viable candidate for high office of serious crimes. The resulting damage to my client’s reputation from this false reporting can only be measured in the many millions of dollars unless the Times immediately corrects its libel. Failure to do so will unquestionably lead to litigation in order to hold the Times accountable for its wrongdoing.”

On the day after the Greene’s counsel sent the aforementioned letter requesting an equal-sized retraction from the St. Petersburg Times, he followed with another letter about what is alleged to be another serious journaistic miscue. Greene’s counsel rails against The Times for allegedly using excerpts of a Mike Tyson interview about drug use that appeared in Sports Illustrated to suggest Greene or his boat were involved in the illegal activity. Better to let the letter explain:

The article republishes the foregoing quotation from Mike Tyson in an online Sports Illustrated article and then falsely conveys to the reader that Mr. Tyson was referring to activities on Mr. Greene’s yacht. The article is about purported activities on Mr. Greene’s yacht, the Summerwind, and the website banner entices readers with “[t]ales from the party boat.” Indeed, the article, as originally published on the Times’ website reported, prior to reciting the Tyson quote, that “Tyson, who was the best man at Greene’s 2007 wedding, makes the Summerwind sound more like the Love Boat.” Mr. Smith only made this change when contacted by Mr. Greene’s representatives, but the edit did not go far enough. Indeed, Mr. Smith’s concession of this point demonstrates the necessary degree of fault for a libel action.

Not only is this time of “reporting” lazy, but it is actionable defamation. Nowhere in the excerpts of Sports Illustrated‘s Pablo S. Torre’s conversation with Mr. Tyson posted on Sports Illustrated‘s website – where Mr. Smith lifted the Tyson quote – does Mr. Tyson mention Mr. Greene, the Summerwind, or even the period of time to which he was referring when he recounts his days as a “junkie.” Moreover, the final “Where Are They Now” article about Mr. Tyson published in Sports Illustrated‘s August 2, 2010 makes no mention of Mr. Greene, the Summerwind, or even the episode’s relayed by Mr. Tyson to Mr. Torres in the online Sports Illustrated article. Mr. Smith’s late-night change to the online version of the Article on August 12, 2010, after receiving a telephone call from Mr. Greene’s representatives about the Article, did not remove or lesson the defamatory sting of the Article.

Moreover, prior to publishing the Article , Mr. Greene provided the Times with an unequivocal denial of the Times’ insinuation that Mr. Greene was involved with or complicit in the conduct alleged by Mr. Tyson in the Sports Illustrated online piece. While you provide some of Mr. Greene’s statements in your Article, based on Mr. Greene’s denial, the Article should never have been published. You apparently did not attempt to contact Mr. Tyson directly, opting instead to irresponsibly to reprint a quotation of Mr. Tyson’s completely out of context and interject into that quotation your own incorrect assumptions, speculation and biases. You, therefore, had no credible basis upon which to publish Mr. Tyson’s quotation in attempt to link Mr. Greene to that illegal conduct.

The letter can be read in its entirety here.

While it’s true the Sports Illustrated excerpt doesn’t mention Greene or his boat, Greene has acknowledged spending part of the summer of 2005 traveling with Tyson. So the question here is whether The Times took an improper leap by tying Tyson’s story about his summer of drug use to Greene and his boat.

Video has since been released of Greene confirming his intention to file a lawsuit if The Times does not run a retraction: