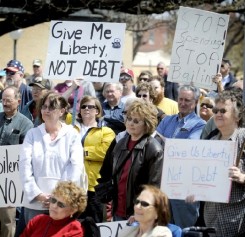 In an election season dominated by stories about the so-called grassroots Tea Party movement and its candidates it is perhaps somewhat surprising to hear that the groups wielding the most influence on the upcoming midterms are shadowy interest groups. Okay, maybe it’s not that surprising, but what is surprising is the amount of money these groups are funneling into various elections. Particularly conservative groups. And equally troublesome is that it is being done anonymously From WaPo.

The $80 million spent so far by groups outside the Democratic and Republican parties dwarfs the $16 million spent at this point for the 2006 midterms. In that election, the vast majority of money – more than 90 percent – was disclosed along with donors’ identities. This year, that figure has fallen to less than half of the total, according to data analyzed by The Washington Post. The trends amount to a spending frenzy conducted largely in the shadows. The bulk of the money is being spent by conservatives, who have swamped their Democratic-aligned competition by 7 to 1 in recent weeks.

The DNC, mind you, has had a good month, though it’s a drop in the bucket compared to outside money. Meanwhile, if you’re wondering whether this is the fallout from the Supreme Court’s decision earlier this year to allow unlimited spending by corporations than the answer is yes. A big yes.

The Supreme Court cleared the way for unlimited spending by corporations, unions and other interest groups on election ads in its 5 to 4 decision this year in Citizens United v. Federal Election Commission. Many interest groups are organized as nonprofits, which are not required to disclose their financial backing, helping fuel the increase in secret donors.

Maybe Glenn Beck will take a break from using his blackboard to showcase all the communist and socialist groups funding rallies and infiltrating the government and instead follow the money.