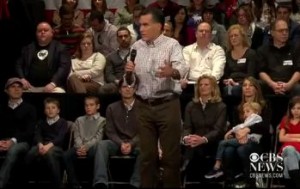 At a campaign event in New Hampshire Sunday, GOP presidential hopeful Mitt Romney made another ill-considered attempt to relate to the common man, telling the crowd that “I know what it’s like to worry whether you’re going to get fired. There were a couple of times I wondered if I was going to get a pink slip.”

The remark has drawn fire from many, but an oppo memo from Priorities USA Action‘s Bill Burton really brings the absurdity of Mitt’s alleged anxiety into stark relief.

Romney has stumbled repeatedly in his attempts to relate to the 99%, joking once that he’s “unemployed,” and flogging his penchant for Subway sammies and coach air travel. On Sunday, he told the crowd that he understands life on the economic edge:

The New York Times pressed Romney for examples of when he almost got the ax, and he couldn’t provide any. Here’s what Romney told The Times‘ Caucus blog:

“I think people imagine that I came in at the top of Bain & Company, the consulting firm, or the Boston Consulting Group — I started at the bottom,” Mr. Romney said. “I came out of school and I got an entry level position like the other people that were freshly-minted M.B.A.s, and like anybody that starts at the bottom of an enterprise, you wonder, when you don’t do so well, whether you’re going to be able to hang onto your job and you wonder if the enterprise gets in trouble, you know, will you be one of those that’s laid off. That’s what’s happening around the country to a lot of people today, and it breaks your heart to see people lose their jobs. Like everybody else, everybody in the private sector knows that there’s some prospect that you might lose your job.”

Former Obama spokesman Bill Burton, though, points out that Romney has actually enjoyed a kind of security that most of us will never know:

Unlike small business owners who take great risk to put themselves on the line, Mitt Romney was guaranteed millions of dollars no matter the outcome of his Wall Street buyout enterprise.  Romney’s absurd rhetoric is inconsistent with the facts surrounding his own situation and insensitive to the thousands of American who lost their jobs so Romney could extract millions for himself.

Burton’s statement is supported by an oppo memo that details how Romney was guaranteed his old job back should he fail as head of Bain, and how Romney even asked Bill Bain to come up with a cover story if that happened.

Gingrich: Hard for Free Enterprisers to Justify Romney’s Looting. At a press conference this weekend Gingrich said, “Those of us who believe in free markets and those of us who believe that, in fact, the whole goals of investment is entrepreneurship and job creation, would find it pretty hard to justify rich people figuring out clever, legal ways to loot out a company.” [Bloomberg News, 1/9/12]

Romney Claimed He Often Worried About Being Fired. “I know what it’s like to worry whether you’re gonna get fired,” Romney told a rally. “There were a couple of times I wondered whether I was going to get a pink slip.” He didn’t offer specifics. [Boston Globe, 1/8/12]

Romney Was Guaranteed Old Job With Raises If He Failed at Bain and Co. According to the Boston Globe, when Romney was offered the job as head of Bain and Co., he hesitated because of the professional risk. According to the Globe, “Romney explained that he didn’t want to risk his position, earnings, and reputation on an experiment in investing. The offer was appealing, Romney recalled in a recent interview, but he wasn’t going to make such a decision in a “light or flippant manner.” So Bain sweetened the offer. He guaranteed that if the experiment failed, Romney would get his old job and salary back, plus any raises handed out during his absence.”” [Boston Globe, 6/26/07]

Bain Agreed to Create False Cover Story for Romney if He Failed. According to the Boston Globe, “Romney had one more concern: the impact on his reputation should he prove unable to do the job. In the end, Bain agreed to craft a cover story if necessary, promising to bring Romney back to the consulting firm and explain Romney’s return as a matter of his being more valuable to Bain as a consultant. “So,” Bain says, “there was no professional or financial risk.”” [Boston Globe, 6/26/07]