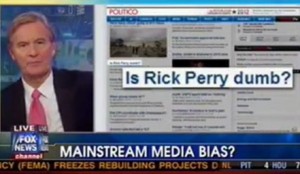 On Fox & Friends Tuesday morning, co-host Steve Doocy teased a segment on Politico‘s “Is Rick Perry Dumb?” article by calling them “that lefty website,” and wondering if Politico had ever run a headline like that about a Democrat (they have). Oddly, in the actual segment, Doocy asked conservative radio host Laura Ingraham to weigh in on the article, and she didn’t really push back against Politico, or even the notion that Perry might be dumb, and the segment never even got around to the question of Politico‘s supposed bias.

In this short tease, Doocy lashes out at Politico, “that lefty website,” over the headline in question:

Now, the suggestion that Politico has a “lefty” bias would elicit chuckles from anyone who isn’t invested in delegitimizing mainstream journalism. In fact, liberals often accuse Politico of the exact opposite, which is often a good sign when it comes to political reporting. If Politico has a bias, it’s toward ping-pong fast reporting that keeps people clicking.

In fact, when I asked Jonathan Martin, the author of the Politico piece, if he had any reaction to Doocy’s slam, he referenced another story he’d written that garnered criticism from the left, saying, “Just as I did when you asked about the Obama complaints, I’ll let my reporting speak for itself.”

What makes the suggestion even more ludicrous is the fact that the entire premise of the piece is Republican agita about Perry’s intellect, and all of the money quotes in Martin’s piece come from Republicans.

That contradiction became apparent when Doocy & friends actually interviewed Ingraham about the piece, as the chyron continued to blare about Politico’s bias. Co-host Alysin Camerota noted that a portion of a Perry interview with Ingraham was cited in the article as evidence of Perry’s 98 lb. intellect, and asked Ingraham what she made of the Politico piece. Rather than push back, Ingraham seemed to think it was fair game.

Of Perry, Ingraham said, “I think he’s in the process of forming his approach to China. I think he has to get a better answer than he had on my show.”

Credit Ingraham for honesty (and for inventing the awesome word “bromidial”), and for forcing F&F to abandon their Politico-slamming premise, even if she did go on to try and throw attention off of Perry by observing, “I don’t think President Obama has ever answered a question on China in a very specific or scintillating manner, either.”

This segment had amusing echoes of yesterday’s Megyn Kelly interview with Michelle Malkin on the same subject, wherein Malkin spends the entire segment demanding equal treatment for Democrats and attacking President Obama, but never really gets around to saying that Perry is all that smart (Malkin’s rejoinder, “Compared to what?” probably sounded better in her head). My fellow liberals might be tempted to take this as an admission, but I think it has more to do with the way conservatives have succeeded in demonizing academia, just as they have the mainstream media. The worst thing Politico, or anyone else, could do to a GOP candidate would be to run a headline that says they’re an intellectual giant.