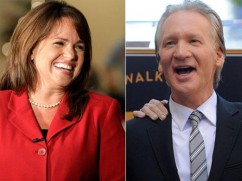 ALL it took was some 30,000 Republican primary voters in a tiny state to turn Christine O’Donnell into the brightest all-American media meteor since Balloon Boy. For embattled liberals, not to mention the axis of Comedy Central, “Saturday Night Live” and Bill Maher, she’s been pure comic gold for weeks: a bottomless trove of baldfaced lies, radical views and sheer wackiness. True, other American politicians have dismissed evolution as a myth. Some may even have denied joining a coven. But history will always remember her for taking a fearless stand against masturbation, the one national pastime with more fans than baseball.

I’m going to hazard a guess it was less those 30,000 Delaware voters that turned O’Donnell into a “media meteor” than the potent combination of Sarah Palin and Bill Maher simultaneously shining (very different) spotlights on her. But nevertheless, she is a star and Rich thinks she might actually help the GOP. Though perhaps for reasons other than the ones you can expect to see in a campaign ad.

Whatever her other talents, she’s more than willing to play the role of useful idiot for her party. She gives populist cover to the billionaires and corporate interests that have been steadily annexing the Tea Party movement and busily plotting to cash in their chips if the G.O.P. prevails.

While O’Donnell’s résumé has proved largely fictional, one crucial biographical plotline is true: She has had trouble finding a job, holding on to a home and paying her taxes. In this, at least, she is like many Americans in the Great Recession, including the angry claque that found its voice in the Tea Party. For a G.O.P. that is even more in thrall to big money than the Democrats, she couldn’t be a more perfect decoy.

Basically, Rich thinks O’Donnell is a convenient beard for the GOP’s corporate interests. Which may be true to some extent but completely ignores the argument that the GOP is running scared to some extent from the surge in Tea Party candidates who’ve made it onto the November ballot (alas Rich does not mention Carl Paladino in today’s column). Perhaps that’s because Rich thinks big money is behind the Tea Party movement.

“Big money rains down on the “bottom up” Tea Party insurgency through phantom front organizations (Americans for Prosperity, Americans for Job Security) that exploit legal loopholes to keep their sugar daddies’ names secret.”

Either way, Rich believes the future is rosy for O’Donnell: “By the time her fans discover that any post-election cuts in government spending will be billed to them, and not the Tea Party’s shadowy backers, she’ll surely be settling her own debts with fat paychecks from “Fox & Friends.”