French Teacher Stabbed in Classroom by ISIS Supporter: ‘This is a Warning’ (UPDATED)
video

French Teacher Stabbed in Classroom by ISIS Supporter: ‘This is a Warning’ (UPDATED) 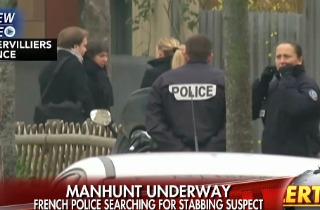 Nearly one month after Islamic militants went on a rampage throughout Paris, France saw a new act of reported terrorist violence today, when a preschool teacher was stabbed today by a man shouting support for ISIS.

French authorities are looking into the Parisian suburb of Aubervilliers, where a masked assailant with a box cutter and scissors attacked a man who was preparing for a lesson in his own classroom. While CBS reported that local officials said it was too soon to determine the exact motives, the attacker was reported to have shouted “this is for Daesh [Islamic State], this is a warning,” during the assault.

France remains on high alert in the wake of the Paris attacks, and a manhunt is underway after the unknown stabber who fled Jean-Perrin School. The teacher was stabbed in the side and neck, and was taken to the hospital. His injuries are not considered life-threatening.

Philippe Galli, the top regional government official, told reporters there were no children present, but other staff members were in the building during the attack. Classes have also been cancelled for the day.

ISIS’ French magazine, Dar-al-Islam, recently urged followers to kill teachers for their teaching of secularist ideas that oppose the extremist religious principles of the radical group. This stabbing comes weeks after a separate incident when a Jewish teacher in Marseille was also attacked by ISIS supporters.

Watch a report on the story in the video above, via Fox.

UPDATE – 11:10 A.M. EST BBC reported to have received a report from French prosecutors, saying that the story was made up by the teacher.