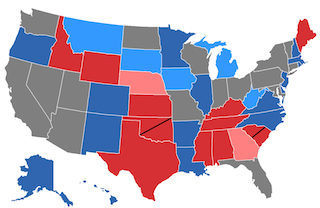 The 2014 midterm elections have finally arrived and voting is underway in all 50 states. There are plenty of major gubernatorial and congressional races — not to mention some crucial ballot referendums — all across the country, but all anyone in the political media really seems to care about is one thing: the Senate.

Conventional wisdom seems to be that Republicans will win the six seats needed to take over the Senate from Democrats, giving them control of both house of Congress for President Barack Obama’s final two years in office. But if you ask Vice President Joe Biden, Democrats are going to maintain a two-seat lead in the Senate, so you never know until polls have closed. And even then, potential run-offs in Georgia and Louisiana have some pundits predicting we won’t know which party really controls the Senate until January 2015.

Below are the 12 most competitive races of the cycle — the ones that will determine which way the Senate falls. We will be updating the winners throughout the evening as they are called so keep checking back here for the most complete picture of where things stand.

51 seats needed for a majority; Republicans must pick up 6 seats.