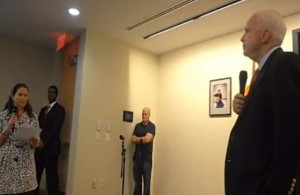 A Wednesday town hall meeting by Senator John McCain (R-AZ) has generated significant buzz this week over an exchange he had with Caren Teves, the mother of the late Alex Teves, who was slain in the Aurora movie theater mass shooting. The conservative Washington Free Beacon is now claiming that MSNBC used “selectively edited” video to “smear” Sen. McCain, and claims to have the “full video” of McCain’s response. There is more to the video than was shown on MSNBC, but the Free Beacon is doing some smearing of its own, and some “selective editing.” We’ve got the real deal.

The exchange in question featured Caren Teves asking Sen. McCain about an assault weapons ban, and as Rachel Maddow pointed out on her show Thursday night, featured a jump cut right to McCain’s answer: “I can tell you right now you need some straight talk. That assault weapons ban will not pass the Congress of the United States.”

That edit was made by local Arizona TV station KTVK, but it generally followed the principles of TV news edits you see every day: here’s the question, skip a bunch of blah-blah, here’s the answer. Watch any TV clip of a White House briefing, and you’ll see the same thing. At issue here, though, is whether that edit was fair to John McCain, an issue that, again, Rachel Maddow raised on her show Thursday night when she aired KTVK’s clip.

That’s not enough for The Washington Free Beacon, who insist that MSNBC deliberately tried to “smear” McCain by omitting a portion in which he says that “our hearts and our prayers go out to you and your family,” among other things. The theory seems to be that, to the degree McCain’s answer did or did not seem insensitive is mitigated by that sentiment. That’s a dubious point, at best, since I don’t think anyone doubts that Sen. McCain’s heart goes out to innocent shooting victims. In any case, it’s not a news editor’s job to worry about how John McCain looks, it is to convey the substance of the exchange as fairly as possible, within the time constraints of a TV news segment. If the edit did make McCain look bad, that was not the purpose of it. The section they took out was lengthy, and had nothing to do with the answer to the question Teves asked.

Of course, KTVK is not the prize for the Free Beacon, Rachel Maddow is. Here’s how they described Maddow’s handling of the clip: (emphasis mine)

MSNBC’s Rachel Maddow ran with KTVK’s segment during her show Thursday night, sarcastically saying that McCain’s use of the phrase “straight talk” led to “boisterous” applause from the senator’s constituents.

Maddow admits, “Obviously there was an edit between the end of the woman’s question and the part where John McCain sneers the straight talk line at her. So maybe that edit was cut in a way that’s not fair to John McCain. Maybe he wasn’t in real time so insensitive and abrasive, to a woman who probably deserves some sensitivity when she is talked to about these matters.”

Maddow is right. The edit was “cut in a way that’s not fair to John McCain.” In “real time” McCain was not “so insensitive and abrasive to a woman who deserves” as much.

Unfortunately, Maddow did not feel it was necessary to play the full video for her viewers.

That’s not exactly right, though, is it? It’s obvious from her commentary that Rachel did feel it was necessary for her viewers to consider the full context, but simply didn’t have access to it. That KTVK clip aired Wednesday night, and was replayed on other MSNBC shows on Thursday. The video that the Free Beacon is pimping wasn’t posted to YouTube until some time late in the day on Thursday. It doesn’t appear to have collected its first view until right around Maddow’s airtime, and even now, has racked up only 2,200 views on the site. It is a certainty that Rachel would have played a longer clip if she had had one, and probably will play a longer clip on her next show.

However, it shouldn’t be the clip that the Free Beacon is promoting, which features some “selective edits” of its own. According to their clip. Caren Teves asked McCain “If not, why not?”

They deliberately omit almost all of Caren Teves’ question, which also happens to show Ms. Teves onscreen, addressing Sen. McCain with a very specific question, one which he completely fails to answer. The optics involved are a subjective matter, but the care and detail that she put into her question are at least as relevant to those optics as McCain’s well-wishes.

Also missing from the Free Beacon‘s clip is Sen. McCain’s final exchange with Caren Teves, which is also very telling. After evading her very specific question, McCain tried to change the subject, from massacres like Aurora to the handgun killings that plague Chicago.

“I know,” McCain snaps. “Yeah. I understood that from your opening statement. But I hope we are concerned with more of the nation than just Arizona.”

Yeah, lady, stop being so selfish.

The issue here shouldn’t be whether McCain was too abrasive or insensitive, or whatever you thought his answer was, it should be whether he answered her question. He did not, and she deserved an answer. Be that as it may, there is always “more context” that can change the subjective ways in which we view things like this, but in delivering the news, choices have to be made, and the choice KTVK made was a fair one. McCain did offer a grieving mother “straight talk” that was anything but, and his kiss-off of Teves was arguably “worse” than what KTVK put out, but that wasn’t the point. Question. Answer. That’s it.

At the same time, giving “full context” also wasn’t the Free Beacon‘s point. They had no interest in showing Caren Teves’ impassioned question, or McCain’s high-handed dismissal of her as selfishly un-American, it was to grind an ax against MSNBC, and Rachel Maddow.