Gallup: Republicans Far More Willing To Criticize Their Own Party Than Democrats 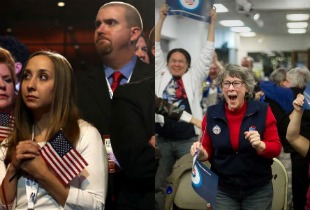 It is a rare event when Americans across the political spectrum share the same opinion on just about anything. The aftermath of the 2012 election has resulted in an exceptional moment of consensus: the Republican Party is just too “inflexible.” These are the findings in a recent Gallup poll of American adults. But while Gallup found that Republicans are willing to admit that their party has more than a few flaws, the polling firm found that Democrats are much “less critical of their own party.”

RELATED: USA Today/Gallup Poll: 70% Of Americans Can’t Wait For The 2012 Race To Be Over

Gallup identifies a trend in this survey: “Republicans are much more likely to criticize their own party for its style or approach than for its substance.” Just 33 percent of Republican respondents found nothing about their party worthy of criticism.