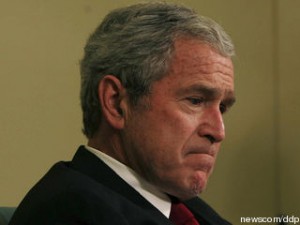 Earlier today, Jeb Bush mentioned that President Barack Obama owes “a little tip of the hat” to President George W. Bush. While Obama isn’t likely to thank Bush for influencing his policy, it seems even more unlikely following a CNN poll that found Bush to the least popular living president.

RELATED: Jeb Bush: Obama Should Give My Brother George ‘A Little Tip Of The Hat’

According to the poll released Thursday, 54 percent of those questioned had an unfavorable view of Bush, compared to 43 percent favorable. The latter of which is the same as it was in 2010, “but is up from his mid-30’s favorable rating during 2009, his first year out of the White House.”

On the other hand, two-thirds of those questioned had a favorable view of President Bill Clinton — who’s been in the news quite a bit recently. How might this affect Team Obama’s campaign strategy?

“Don’t be surprised if the Obama campaign mentions the name of George W. Bush at every opportunity, and don’t be surprised if that strategy works,” said CNN Polling Director Keating Holland. “And the mention of Bush’s name appears to prompt at least a few people to take a more positive view of their current financial situation.”