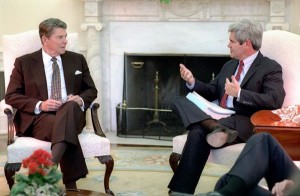 New York Times‘ political blogger Nate Silver crunched the numbers and found that Republican hopeful Newt Gingrich has mentioned Ronald Reagan a whopping 55 times during the GOP presidential debates — more than any of the other candidates combined.

RELATED: Meghan McCain: Ronald Reagan Would Be Considered A ‘Dirty Moderate Like Me’

Silver found that the former Speaker of the House is averaging a staggering 3.2(!) Reagan namedrops per debate.

In contrast, former Massachusetts Governor Mitt Romney has only mentioned the Gipper’s name a paltry 6 times and in those cases, Silver notes, was merely to criticize Gingrich’s Reagan comparisons.

Here are a few instances of Gingrich’s Reagan namedrops:

GOP Debate, 9/7/11
GINGRICH: I served during the Reagan campaign with people like Jack Kemp and Art Laffer. We had an idea for job creation. I served as a freshman — or as a sophomore helping pass the Reagan‘s jobs program. At newt.org, I put out last Friday the response to the Obama stagnation.

The fact is, if you took the peak of the Reagan unemployment, which he inherited from Carter, by last Friday, going month by month, under Ronald Reagan, we’d have 3,700,000 more Americans working.

ABC Iowa Debate, 12/11/11
GINGRICH: Well, I think that there’s a clear record, I worked with Ronald Reagan in the early ’80s and his recovery program translated into today’s population of about 25 million new jobs in a seven-year period.

GINGRICH: I think sometimes it is helpful to have a president of the United States with the courage to tell the truth, just as was Ronald Reagan who went around his entire national security apparatus to call the Soviet Union an evil empire and who overruled his entire State Department in order to say, “Mr. Gorbachev, tear down this wall.” Reagan believed the power of truth restated the world and reframed the world. I am a Reaganite, I’m proud to be a Reaganite. I will tell the truth, even if it’s at the risk of causing some confusion sometimes with the timid.

In the Ronald Reagan primary, Gingrich is far and away the winner.