Giuliani On Times Sq. Bomb: Everyone At Fault For ‘Missing Signals’
video

Giuliani On Times Sq. Bomb: Everyone At Fault For ‘Missing Signals’ 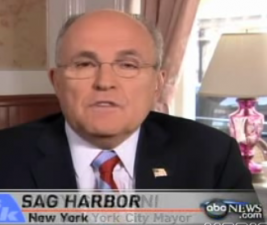 In the eight and a half years since he was mayor of New York City Rudy Giuliani has spent a making the sort of statements and political decisions that have pretty much succeeded in tanking any chance he had of a bid for higher office (“a noun, a verb and 9/11” rather succinctly summed it up a few years back).

That said, in the wake of what looks to be the first serious terrorist attack in New York City since 9/11, Giuliani still happens to be the voice of actual experience on these matters. Following Eric Holder’s headline-making appearance, Jake Tapper interviewed Giuliani from Sag Harbor, and if you can cut through some of the obviously politically motivated statements (and sneering laughter, something that always make watching him that much less enjoyable) than I think the former Hizzoner made a few salient statements. One being — and I suspect this is going to be the new meme this coming week — is that when it comes to thwarting terrorist attacks we have merely been lucky.

He also thinks we are being too careful with our Mirandizing of suspects and that if Eric Holder wants to change how the rules apply he should quit talking about it and get to it!

I really at this point am frustrated by the lack of urgency that is shown about these terrorism matters. I mean, we’ve had three now where we’ve seen, you know, big breakdowns: Fort Hood, Christmas Day, and now — and now this one.

It’s about time that we stopped thinking about it and we stopped studying it. I don’t know how often the attorney general said he was studying things. How about we stop studying and we start doing things, like we change Miranda, like we fix what appears to be a policy of political correctness in which we missed every signal that related to Major Hasan and promoted him in the military?

Full video below. Perhaps not surprisingly, he supports Joe Lieberman’s proposed bill to strip suspected terrorists of their