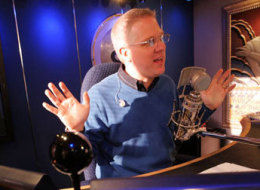 Yesterday we joined a number of other sites in reporting on comments Glenn Beck made on his radio show that 10% of Muslims are terrorists. At the time, I guessed two results would come of the mini-scandal. Beck and crew chose neither. In the words of Media Matters, they “doubled down” on the claim. However, this time, they brought facts to back them up.

Stu Burguiere, the radio show’s executive producer, followed Beck’s mantra of “do your own homework” to a tee and wrote this blog post, which uses a World Public Opinion poll (link is a PDF) demonstrating that at least 10% of the people in the Middle East (the “Islamic World” in the parlance of the report) support violence against American civilians. Burguiere read from his post on today’s show. At the bottom of it, he asks for the media ‘s apology (our site included, through a link). Well, here it is: I’m sorry. You appear to be right. However…

If you’ve read Burguiere’s very persuasive post, you can guess what’s coming next. Not only does he use the best tactic in a debate (hard facts from a reliable source), he also uses the second best (calling out your opponent’s only possible argument and belittling it before they can use it). Burguiere begins his post by using a dictionary definition of “terrorist” that defines it as “a person, usually a member of a group, who uses or advocates terrorism.” He later writes this:

“Alright, now that we have the facts…let me articulate the lefts last ditch argument:

First, allow me to point out that your argument has now boiled down to:

Secondly, even that point is wrong. Read the definition of terrorist again:

a person, usually a member of a group, who uses or advocates terrorism.”

I’m sorry, Stu, but I’m going to go there. By that dictionary definition, you guys are technically correct. I will concede that point, but with the caveat that your poll doesn’t include any Muslims living outside of the Middle East and, less relevant, may include non-Muslims living within it. However, by the definition of “terrorist” that every American has in their head since 9/11, you probably aren’t correct. To many, a terrorist is a person who has, is, or is currently planning to commit an act of violence so as to promote fear.

Now, I’m going to use that second debate tactic. The obvious response to that is something Beck says a lot: he doesn’t think his audience members are morons. Neither do I. However, when you use stats that make it sounds like I could go to any 10 person Muslim family in America and find a bomb in one of their rooms, when they’re actually saying large portions of the Middle East wishes ill and violence against American civilians, it’s dangerous. Especially so when (here’s the first debate tactic) half of the country already has an unfavorable view of the entire religion (link is a PDF).

Look, I know my argument is more about feelings than facts and I know it’s a little flimsy. For instance, I hate the theory, espoused by the likes of early-2000s Eminem and one of my least favorite episodes of South Park, that words like “gay” and “fag” shouldn’t offend homosexuals because, in modern connotations, they actually mean “stupid” or “lame.” However, here I am, basically arguing the same thing about the word “terrorist.” I know I have no proof as to why those two arguments are different, but I feel that they are.

And therein, basically, lies the crux of my (admittedly flimsy) argument. Recently, Glenn Beck has repeatedly reminded viewers not to listen to experts on economics and such, and to, instead, listen to their gut. That’s what I’m going to do. Sure, you may have found stats that seem to support that 10% of Muslims are “terrorists.” Therefore I apologize for implying it was so off base. However, I still think the way Beck tossed out that number (in a conversation that was wholly unrelated to Islam) was a bad idea. That’s my gut call and I’m sticking to it.

Check out today’s radio clip below.