Glenn Beck: ‘Dangerous’ Trump Is Trying to Put Megyn, Other Critics ‘In His Dungeon’

Glenn Beck: ‘Dangerous’ Trump Is Trying to Put Megyn, Other Critics ‘In His Dungeon’ 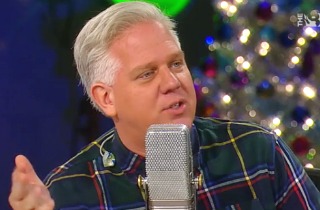 Glenn Beck‘s anger at Donald Trump is at a whole new level now that Trump is warring with Fox News and Megyn Kelly. Beck has been trashing Trump for months, but going after Kelly seemed to get Beck worked up enough to post a lengthy diatribe against the GOP frontrunner last night.

Beck said, “We already have a president who will not talk to Fox News. Now Donald Trump? Only liberal progressives block Fox.”

He went through Trump’s pattern of sweet-talking, then hitting you hard if you don’t kiss his ring, then trying “to get you fired and completely discredited and isolated.”

Beck warned that this is what Trump is doing to Kelly because she is strong and bullies like trump is “afraid of people who are actually strong and truly self confident.”

He decried Trump as “very dangerous” and “beyond destructive,” and even went as far as saying this:

Donald Trump will be more than happy to be your king.

However, it is vital to remember, —-all kings have a dungeon.

And he is trying to put Megyn Kelly and anyone else that does not agree, say nice things about him, will not endorse or play by his rules in his dungeon right now.

I warn you: Donald Trump or anyone that is a big government progressive with narcissistic tendencies who will preach populism and nationalism in a time of economic and social unrest is a dangerous road to go down.

No Donald on the debate on Thursday? First let me say: I will believe it when I see it. However this is not…