Beck: ‘Not Saying Obama Is With Terrorists …But He Is Sympathetic To Their Cause’ 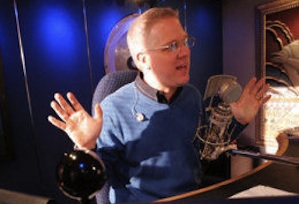 One of the first things that any undergraduate student learns in their first undergraduate class is that when someone prefaces a comment with “I’m not saying (insert something honest, controversial, or potentially offensive), but…” what they really mean is that they actually do believe in whatever thing they are saying. For example, on Glenn Beck‘s radio program this morning, Mr. Beck made clear to his audience that he’s not saying that President Obama is with the terrorists, before clarifying that “he is sympathetic to their cause.”

But that’s not the meat of the clip below. The eyebrow raising moment comes when Beck alleges that Obama “just sees us the oppressor nation,” before saying that Obama “is not with the terrorists,” making clear that that is not what he is saying before continuing “but he is sympathetic with their cause.” To be fair, Beck (and his radio pals) seem to almost immediately recognize the potential Media Matters headline that would come from this declaration, and reshaped the initial comment to make clear that Obama was not in league with terrorists or with suicide bombers.

Listen to the audio clip below, courtesy of Mercury Radio Arts: