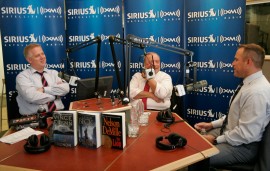 Last November the New York Times penned a piece tapping Glenn Beck the new Oprah Winfrey of the book world. The assignation took more than a few people aback — Glenn Beck not being the first person who leaps to mind when one thinks of books nor Oprah. But Beck’s ability to make a book successful — almost any book, it would seem — after even a small recommendation, has proven out this year. Case in point: on Monday, the day before The Overton Window launch, three books on Amazon’s Top Ten list could be attributed to Beck: The Overton Window; George Washington’s Sacred Fire, a book Beck recommended a few months ago; and The Road to Serfdom, an obscure 66 year-old book Beck devoted the better part of a show to last week. In a world that has seen book sales plummet drastically, and the publishing world sent into a permanent state of scramble over how to get people to read more, believe me when I say this ability to launch a book to the top of the Amazon list has not gone unnoticed.

Needless to say, Beck’s choices are a far cry from Oprah’s Book Club. While I can’t think of any other TV personality (notwithstanding Oprah) with the ability to command people’s leisure time, you will likely not see Beck recommending Eckhart Tolle and Pearl Buck. Beck’s taste tends to skew to political thrillers of the sort that back up his world view that government is secretly out to get us. Also, books about the Founders.

Beck does share the book gold wealth, however, and not just with obscure, dead authors. He regularly features thriller writers on his radio show, and from time to time has them on his television show (sort of like a very bizarro version of Charlie Rose). He once described his interest in thriller writers thusly: “They have to know what’s really going on, so then they can weave in a story that’s believable. They will also tell you the truth, they have nothing to gain.” I have to imagine thriller writers, and their editors, and their agents, and their publicists are only too happy to comply with this very Beckian line of thinking….among other things, it’s certainly a lot cheaper than a center table at the Barnes and Noble.

Sirius also decided to utilize Beck’s publishing power to help gin up interest in a new series they have launched on SIRIUS XM Book Radio called ‘Author Confidential,’ which features intimate conversations with iconic authors in front of a live studio audience of listeners and fans. Beck appeared with guest thriller authors Vince Flynn and Nelson DeMille — who more or less share his world view of things — in front a live studio audience consisting of the first ten people who called in after Beck’s appearance was announced on the channel last week — the seats were filled in less than 10 seconds.

Mediaite was in attendance, so I can tell you in advance the conversation mainly hewed to familiar Beck territory; namely the government has gone off track, political thrillers are frighteningly close to the truth (as they see it), and plenty of talk about Ayn Rand. A couple of interesting tidbits: Beck apparently visited the Vatican earlier this year and got a special tour of the secret archives of the pope where he saw the original divorce request of Henry VIII. When Flynn is writing he won’t listen to Beck or Rush, or read the newspaper. And in his latest book The Lion, Nelson DeMille killed of a Newsday critic who once gave him a scathing review. To which Beck noted that he’d have to write World War III to kill off all his critics. The show airs tonight at 9pm on the Sirius book channel (publishing people…Sirius has a book channel!)…and yes, Woodrow Wilson‘s name comes up.