Glenn Beck Puts Aside Any Past Differences To Eulogize Andrew Breitbart 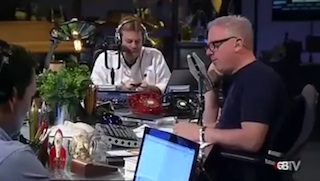 The news of Andrew Breitbart’s passing took many by surprise. Only some people were live on the radio when it happened. That’s what happened to Glenn Beck and crew this morning. Stunned by the news, it took Beck a minute or so to collect his thoughts as he rushed through a number of reactions (including exclaiming that there needed to be an autopsy to check for foul play as well as a request that his co-hosts would do the same if he ever died suddenly). After that though, he reflected on his relationship to the man and what Breitbart contributed to the conservative cause.

It should be noted that, recently there had been tension between the two men. Breitbart accused Beck of “throwing [him] under the bus” during the Shirley Sherrod scandal and Beck’s The Blaze was one of the biggest critics of a recent video from Breitbart protege James O’Keefe. In fact, one wouldn’t be crazy to think the creation of The Blaze itself didn’t sit well with Breitbart

However, before any of that happened, Breitbart and Beck held each other in high esteem and, this morning, Beck made it clear that he wanted to go back to those times:

Beck went on to tell the story of the first time he ever talked to Breitbart; a phone call in which Breitbart offered his Fox News show the first crack at the O’Keefe video that went on to create the huge ACORN scandal.

Beck finished by talking about the fact that his sites and Breitbart’s have since become rivals but made it clear there was no bad blood.