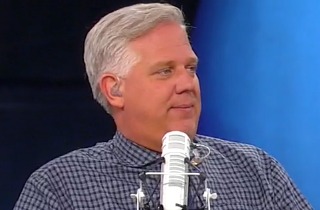 What is it with all the Nazi stuff this week? First it was the pastor on Fox who said Christian persecution in the U.S. is a threat because the Jews weren’t burned right away, then it was Pat Robertson consoling a mother mourning the loss of her three-year-old by saying at least he wouldn’t grow up to be Hitler, and now it’s Glenn Beck, somehow making the connection between McKinney and the Nazis.

Beck and his co-hosts were going off on the media reaction to McKinney, with Pat Gray mock-assuming that people are so outraged because the cop “killed every black person in the neighborhood.”

Beck lamented how people are afraid to speak out these days because “you might be called a nasty name.” He invoked Hitler (not the first time he’s done so) and said, “If you would go to a crowd and you were there and Hitler was speaking out, if you booed, the brownshirts would surround you and beat you within an inch of your life.”

What does this have to do with modern times? Beck elaborated: