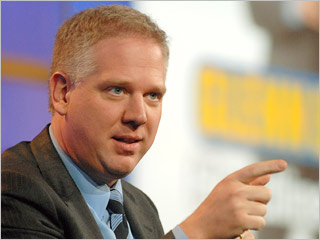 A commercial that caused some controversy in England last month has suddenly inspired fresh headlines in America today and even has Glenn Beck announcing that he will officially be swearing off Levi’s jeans. According to Beck, the ad “glorifies revolution” and may even have Communist and Socialist implications.

Anyway, the ads were pretty gorgeous, won some awards, and chances are good that, if you went to the movies in 2009 or 2010, you probably saw one and maybe even liked it. So the company, wanting to stick with a good thing, decided to make a version that would work for the global market. So they kept the “pretty young people + poem” angle, this time using a poem by Charles Bukowski. However, amidst the shots of models making out while wearing perfectly fitting Levi’s jeans, the commercial also featured images of young people engaged in protests and staring down riot police.

Unsurprisingly, people in England weren’t thrilled to have these ads appear last month during the London riots. So the company pulled them in the United Kingdom (although versions in other nations aired as planned). At the time, they released this statement:

“We are deeply disheartened about the unprecedented events taking place in the U.K. at the moment and which have impacted communities across the country. While ‘Go Forth’ is about embodying the energy and events of our time, it is not about any specific movement or political theme; rather, it’s about optimism, positive action, and a pioneering spirit. Out of sensitivity for what is happening in the U.K., we have temporarily postponed our cinema and Facebook spots in the country.”

Anyway, cut to Monday night when the ad finally aired here in America during the Rams-Giants game. While many, many people saw the ad, The Blaze’s Jonathon M. Seidl was able to pick up on its insidious nature, writing a post yesterday entitled “LEVI’S AIRS CONTROVERSIAL YOUTH RIOTERS AD DURING FOOTBALL GAME: ‘GO FORTH’”:

“On Monday night, I jumped out of bed after seeing something startling on TV. See, I decided to turn in a little early and watch the Rams-Giants game before dozing off. But about a half hour into it, I saw something shocking. It wasn’t a commercial for the latest horror flick, or a wardrobe malfunction. Instead, it was a jeans ad. A Levi’s jeans ad.

But it wasn‘t just any Levi’s jeans ad. No, this ad showed young people reveling in rioting. There was one young person riding his bike through tear gas, a mob of young people marching, and to top it off a young man shown taunting riot police.

That was enough to make me sit straight up.”

This must have caught the attention of Seidl’s boss because, this morning on his radio show, Glenn Beck was railing against the ads and saying that he would never again buy the company’s products. This is doubly sad because, apparently, Levi’s used to be his favorite jeans brand. On the show, he described wearing a pair of Levi’s jeans just the other day and discussing them with his wife:

“I put on a pair of old Levi’s and I said to my wife, ‘I love Levi’s! I’ve loved them since I was a kid. They’re my favorite jeans! I don’t know why I don’t wear them all the time!’ I am turning my red tabs in. I will not wear a pair of Levi’s. Won’t do it.”

This is big news. Apparently the Beck household is filled with some of the dullest conversation imaginable.

Seriously though, co-host Pat Grey pointed out that the media would accuse Beck of calling for a Levi’s boycott but Beck reminded listeners that he doesn’t believe in boycotts. Still, as we’ve pointed out in the past, the only difference between an influential public figure saying a company is trying to inspire violent revolutions and actively calling for a boycott is the lack of pamphlets.

Well, the commercial is above and here’s the clip of Beck’s comments. What do you all think?