I wrote a piece of commentary about Joe Klein’s flame war with Glenn Greenwald yesterday in which I conceded Klein’s point about Greenwald’s publication of off-the-record emails. I also pointed out that Klein’s understanding of email confidentiality is shakier than a detoxing jackhammer operator. 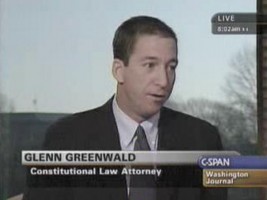 Rather than expressing appreciation for this turn of the tables, Greenwald had some reservations about the piece:

What “basic journalist” ethic has been violated by the posting of those emails? Be specific.
Is that kind the of “journalism” you practice — you only publish things if the subject of what you’re publishing authorizes you to do so and gives you permission? What’s the source of my “ethical obligation’ to keep those documents confidential?

Speaking of “journalistic ethics,” you just wrote a piece accusing me of violating journalistic ethics. Have you ever heard of the ethical rule about including the side of the story of the person you’re accusing? I have a long, detailed post today responding to this accusation that you not only failed to link to, but even failed to summarize or acknowledge at all — to say nothing of your failure to seek my comment. That’s what is called a failure of journalistic ethics.

When I wrote that commentary, I was under the impression that Glenn had received the emails himself, as a member of Journolist. I got that impression from the website on which he posted them, which lists no other source for the emails.

Had I seen Greenwald’s followup on Salon, I would have noted this attribution:

I’m not a member (of Journolist) and never have been. Yesterday morning, one of the participants (whose identity I don’t know) emailed me to advise me that Joe Klein was sending out extremely insulting and derogatory emails to the entire group about me, and forwarded that email discus sion to me, telling me he thought it was wrong that I was being repeatedly attacked by Klein in front of hundreds of people — including many people who are my colleagues and peers — without my knowledge and without being able to defend myself.

Having now seen that, I no longer agree that Greenwald had a duty to keep these off the record (a conclusion with which Dan Abrams agrees), but that he did have a duty to include the attribution when he posted the emails.

On the other hand, I could have easily checked Salon for a response from Greenwald, but didn’t. Believing that he was the recipient of the email, it wasn’t necessary to the piece.

After a series of nasty emails, Greenwald and I spoke on the phone this morning, and are no longer mutually convinced that the other is a journalistic Satan.