GOP Rep: Crasher-gate Happened To ‘Most Threatened President Ever’

GOP Rep: Crasher-gate Happened To ‘Most Threatened President Ever’ 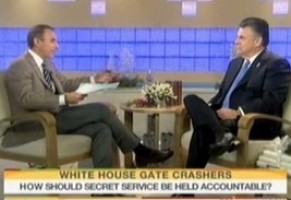 At the heart of the story of Michaele and Tareq Salahi’s big adventure at last week’s state dinner is a security breach so unbelievable, I actually don’t believe it. However, barring the emergence of exculpatory “stunning details” that were absent from this morning’s useless “Today Show” interview, the President would do well to heed the alarm being sounded by Rep. Peter King (R-NY) and “In the President’s Secret Service” author Ronald Kessler in this clip from yesterday’s “Today Show.” King calls Obama our “most threatened President ever,” and Kessler says “it’s only a matter of time before there’s an assassination.”

(Video of the interview with Congressman King starts at the 2:55 mark)

While they differ as to the reasons for concern, both King and Kessler rightly agree that, despite the reality TV angle and the Salahis’ own penchant for the ridiculous, this story is no laughing matter. While the Secret Service downplays the degree to which President Obama faces a greater number of threats than past presidents, the fact that he does is a well-established fact.

So far, the official story is that a uniformed agent at the first checkpoint admitted the Salahis after checking their ID and physically screening them, but did not verify that they were on the guest list for the dinner, thinking this would be done by a later post.

Assuming that there’s nothing more to the story, this was an unthinkable breach of security. Attempts by some to spread culpability to the absence of a Social Office staffer at the checkpoint completely miss the point. Any idiot can pass someone through a metal detector. The most important part of that first checkpoint is to ensure that the person has a reason to enter, that they’re not windpipe-crushing, anthrax-smuggling stealth assassins. It’s basically their sole reason to exist.

Both the White House and the Secret Service, however, were quick to dismiss the notion that the President was ever in any danger, based on the fact that the couple were physically screened.

Part of the problem the Secret Service faces is that they must necessarily fight this PR battle with one hand tied behind their backs. First of all, any perception that the President is/was vulnerable could easily encourage others to give this a try.

This is compounded by the fact that they are limited in their ability to reassure the public, since specific security measures are secret (hence the name “Secret Service”). They are extremely vigilant about this.

Still, at this point, it sends a bad message to downplay the seriousness of this incident. When the Secret Service completes its investigation this week, some pretty drastic consequences are in order.