GOP Senator Grills John Kerry: ‘Our Foreign Policy Is Spinning Out of Control’ 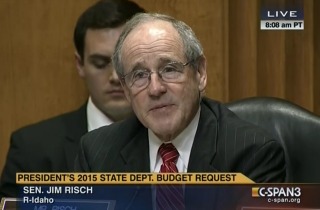 During a congressional hearing on Tuesday in which Secretary of State John Kerry outlined the financial requirements of the State Department, Sen. Jim Risch (R-ID) grilled the secretary on the state of America’s foreign policy. He insisted that, on a variety of fronts, it is hard to escape the impression that America’s approach to foreign affairs is “spinning out of control.”

“You can’t help but get the impression our foreign policy is just spinning out of control,” Risch asserted. “And we are losing control in virtually every area we are trying to do something in.”

Risch said that he could cite a variety of conflicts to support this assertion, but Russia’s destabilization and invasion of parts of Ukraine is what he believed is the most pressing current affairs issue. “This administration said they were going to hit the reset button,” Risch observed. “I can’t help think somebody hit the wrong button, because things have not gone well during this administration.”

Kerry rebutted Risch’s assertion, saying that Russia’s misbehavior was observable under the Bush administration when Moscow invaded Georgia. “And he didn’t even bring a sanction,” Kerry asserted.

Kerry added that America has imposed sanctions as a result of Russia’s actions and has pledged to do more if Russia further destabilizes the situation in Ukraine.

“I don’t know anybody in the United States of America who said we ought to go to war over Crimea,” Kerry continued. “Is there any member of this committee who believes that? I don’t think so.”

“You have to approach these things with some sense of responsibility,” Kerry added. “It’s not just a speech; it’s a policy.”

“The results of foreign policy are not speeches,” Risch agreed. “The major issues, the major initiatives that affect the national security of this country are in very desperate situation in some places and they’re deteriorating.”