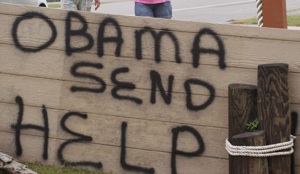 There are a number of reasons to believe that the oil spill story currently unfolding in the Gulf of Mexico is close to entering the pantheon of “epic” news stories. For starters, it’s earned its own shorthand moniker of “Gulf Oil Spill.” It’s also got its own branded graphics package on the cable news channels. But more importantly, it’s beginning to be exploited as a political device, most notably being called “Obama’s Katrina.” Well, there was a delayed response on this story, but it wasn’t by the administration. If the oil spill is anyone’s “Katrina,” its the media’s for taking almost week to cover it on an appropriate scale.

How did we get here? Well, news of the initial oil rig catastrophe first broke on Tuesday, April 20th. In the next few day, there were some terrific and horrifying images that came across the wire, and reports of a small oil spill began to surface. At that time, however, little was known about the story. Given that the offending rig was so inaccessible, it was difficult to send reporters or a news crew to the region to cover the story, which is a legitimate explanation.

But sources from at least one cable news outlet confirmed privately that the cost of sending reporters or a crew to the Gulf to cover this factored into the decision to not cover it – even though there was the clear understanding that this could very well be a big story.

But more importantly, just as the story was beginning to come in to more focus on Friday, April 23rd, the Arizona Immigration bill was signed into law. It was almost as if one could almost hear the nation’s collective news editors deciding that the Immigration Law was to be the controversy for the next few days. And was it ever. Over that weekend, and the two days that followed, the Arizona Immigration law dominated the news, seemingly at the cost of the oil spill coverage.

In fact, through a partnership with TV Eyes, we can determine exactly how many times the words “oil” and “spill” were said in comparison to “Arizona” and “immigration” on television over the course of those first few days.

Following is a comparison of how the broadcast media covered the two stories in the earliest stages of the oil rig calamity:

If you are a more visual person, and need to see these numbers in handy chart form to better understand the news trends of these days, I submit: 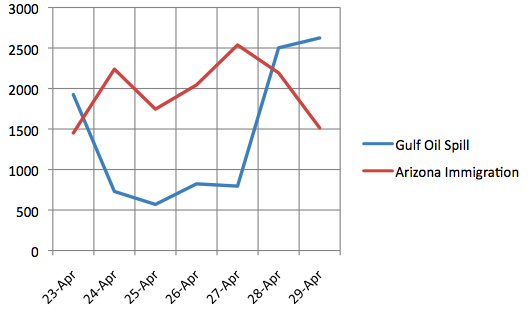 Why does the previous research end on April 29th? Because that’s the day that Louisiana Governor Bobby Jindal (working in close communication with Federal authorities) declared the situation to be a “state of emergency”, which also coincides with the day that the media actually started paying attention to the story.

In the past few days, a number of talking heads and media analysts have asked the question whether this oil spill should be considered “Obama’s Katrina,” implying that the administration was slow to respond to this environmental catastrophe in much the same way President Bush was criticized by some who thought he was very slow to understand and act upon the scale of Hurricane Katrina in 2005. There is a valid debate about how quickly and effectively the administration reacted.

On the 22nd, Press Secretary Robert Gibbs released a statement on the President’s Oval Office meeting to discuss the situation in the Gulf of Mexico that outlined rescue efforts, and announced that the National Response Team had been activated and Unified and Area Commands have been established near New Orleans to coordinate search and rescue operations and oil spill response efforts.

However, during a press conference on April 23rd, Gibbs was a bit more cavalier when asked about how the situation “I don’t honestly think it opens up a whole new series of questions, because, you know, in all honesty I doubt this is the first accident that has happened and I doubt it will be the last,” Gibbs said. Again, one can debate the merits of the Administration’s response, but to call it “Obama’s Katrina” reveals more of a political agenda than a fair or astute analysis.

Unlike Katrina, the scale of this was not immediately knowable – the news initially broke that just the leak was relatively small. And of course, hindsight is 20/20 – no one can be blamed for not predicting the future.

It is odd, then, that so many in the media took the “Obama’s Katrina” political meme and ran with it — multiple examples of the metaphor’s usage can be seen in The Daily Show clip below. But the truth appears to be that the government’s response was within the realm of an appropriate reaction from the very beginning of this disaster. It’s the members of the media, however, that should be asking themselves “is this our Katrina?”