Halperin: Media Remains More Fascinated With Clintons Than Anybody 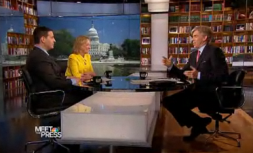 Meet the Press not only devoted some time to discussing Chelsea Clinton‘s wedding this morning, they brought in resident historian Doris Kearns Goodwin to add in her two cents. Joking aside, it is rather astounding how much attention Chelsea’s wedding has received. Goodwin thinks it demonstrates how far we have come as a county (though she neglects to mention in which direction):

We have lived with this family in a very intimate way giving troubles and successes they have had and in a certain sense it shows how far we have come as a country. When Maria Monroe got married, 34 words in a Washington newspaper, compared to incredible excitement. Whatever Democrats and Republicans may say about the Clintons, the legacy in this kid, well-balanced smart and seemingly in a terrific shape is a great legacy to have.

Very true, though again I’m not sure the nation’s sudden obsession with Chelsea necessarily reflects well on the state of…well, a lot of things. Meanwhile, Mark Halperin thinks it’s just the latest evidence of how preoccupied the country continues to be with the Clintons.

It’s hard not to read the emphasis Halperin puts on “anybody” as meaning the Palins. It’s also hard not to read the pandemonium over Chelsea’s wedding as a sign the nation is quite willing to keep the Clinton’s in the national political conversation. Something both the Palins and the Obamas would probably do well to remember. Watch the clip below.