Here’s Why ‘The Biden Rule’ Is Complete Crap
Opinion
video

Here’s Why ‘The Biden Rule’ Is Complete Crap 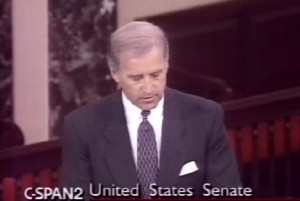 President Obama‘s nomination of DC Circuit Court Chief Judge Merrick Garland has escalated the fight to replace deceased Supreme Court Justice Antonin Scalia, but it has also elevated Vice President Joe Biden to Supreme Leader of Senate Republicans, apparently. Senate Majority Leader Mitch McConnell (R-KY) and a whole mess of legitimate media outlets have taken to citing something called “The Biden Rule” as justification for not taking up Garland’s nomination, or any other from the current president.

That “rule” is, of course, not actually a rule at all, but rather one in a sea of bipartisan pull-quotes that have been deployed by one side or the other in order to prove that, gee whiz, senators like to get their way on lifetime appointments. In Biden’s case, the quotes in question come from a two-minute stretch of a June 25, 1992 speech on the floor of the U.S. Senate:

It is my view that if a Supreme Court Justice resigns tomorrow, or within the next several weeks, or resigns at the end of the summer, President Bush should consider following the practice of a majority of his predecessors and not — and not — name a nominee until after the November election is completed.

The Senate, too, Mr. President, must consider how it would respond to a Supreme Court vacancy that would occur in the full throes of an election year. It is my view that if the President goes the way of Presidents Fillmore and Johnson and presses an election-year nomination, the Senate Judiciary Committee should seriously consider not scheduling confirmation hearings on the nomination until after the political campaign season is over.

There are many reasons why this “Biden Rule” narrative is complete garbage (not the least of which is the fact that, as great as it would be, Joe Biden’s speeches actually don’t supersede the U.S. Constitution), but the simplest is that Biden is being taken out of context, and was talking about a situation completely different from the current one.

If you back the tape up a couple of minutes, Biden clearly and repeatedly disclaims his objective so as not to include a vacancy like Justice Scalia’s. See if you can spot it:

In fact, no Justice has ever been confirmed in September or October of an election year — the sort of timing which has become standard in the modern confirmation process. Indeed, in American history, the only attempt to push through a September or October confirmation was the failed campaign to approve Abe Fortas’ nomination in 1968. I cannot believe anyone would want to repeat that experience in today’s climate.

In fact, then-Senator Biden mentioned “summer” 16 times in that speech, including once in the “Biden Rule” clip. Now, I get that it can be hard to tell, what with global warming and all, but February actually isn’t anywhere near summer. Additionally, Biden’s suggestion was made for an incumbent president who was running for reelection, and nowhere included a suggestion that his nominee never receive a hearing, just not before November.

This surely won’t change anyone’s mind, but at the very least, respectable journalists who are reporting on this ought to also report this important context.