Hey, Were You Aware That There’s a Drinking Game Called Jews vs. Nazis?
Opinion

Hey, Were You Aware That There’s a Drinking Game Called Jews vs. Nazis?

So, were you aware, prior to clicking this headline, that there is a drinking game called Jews vs. Nazis? Up until this moment, I wasn’t, but thanks to this 11th grader at Princeton High School in New Jersey, I am now. Sadly, I wish that I were still unaware, but such is the nature of my job.

The game — sometimes called “alcoholocaust,” which pisses me off because that’s a clever name for a garbage game and these underachievers could clearly use their brains for something better than this — is apparently something that goes on outside of high school parties in Jersey, too. There is a Metapedia article on the game, which seems very involved. (Again, the people who came up with all these rules could have devoted their brainpower to something so much less awful.)

Metapedia dug up the first reference to the game from 2012 and then helpfully included this photo of a Reddit user’s explainer, which you can read at your own risk: 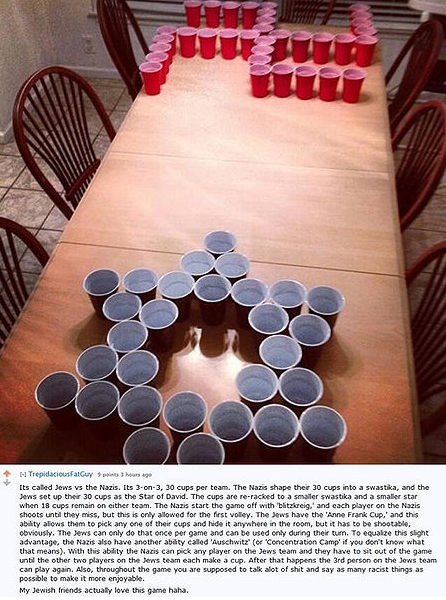 See, I’ve played games with these superfluous types of rules before. It’s terrible. It’s objectively terrible. Maybe it’s fun for one round, but after that, it devolves into a lot of arguing and confusion. The person who came up with the rules is often vilified. Why anyone would want to combine that sort of dumb behavior with the anti-Semitic variety of dumb behavior is a real head-scratcher to me.

Circling back to New Jersey, it’s also a head-scratcher to that high schooler I mentioned, Jamaica Ponder. She’s the one who saw her classmates playing the game on Snapchat, screenshotted it, and blew it up on the Internet. She wrote this:

[N]o, your eyes aren’t playing a trick on you. Yes, that’s a swastika. Double yes- they’re playing Jews vs Nazis beer pong. No again, this isn’t a joke.

Well, perhaps it is a joke. But then I guess the punchline would be: genocide. Pardon me if I don’t find that to be hilarious. The real joke here is that these kids weren’t only insensitive enough to play the game, but also silly enough to post it on Snapchat and leave it there long enough for me, and several others, to take a screenshot.

Putting the picture on social media means that someone was proud enough of the game to want to show it off. Meaning that they must be trapped in the delusional mindset that making a drinking game based off of the Holocaust is cool. Or funny. Or anything besides insane. Because that’s what this is: insanity.

Responses to Ponder’s big news break have been mixed. Some people think it’s too hyped up:

“news: new discovered planet will destroy all life on earth this month

Other people are laughing:

ALCOHOLOCAUST
THIS IS GENIUS
THESE KIDS ARE GENIUSES

This just makes me want to play “Alcoholocaust”

“The final solution to the sober problem” @NYDailyNews

Guess who isn’t laughing? The Anti-Defamation League, that’s who.

They’re using the incident, which they tell Forward has been increasing in popularity over the last three years, as a rallying point to get the public more interested in their goal of more comprehensive Holocaust education.

Listen. It’s a Friday night. I hope you all go out, have fun, and even play beer pong, but please do not do this. For starters, no one wants to go to a party just to play some convoluted, rule-laden game. For enders, it is 2016 and even if you don’t see what a horrible idea it is to be a raging anti-Semite, everyone on your Snapchat will see and I will not hesitate to write a new column about you on Monday. People, do not test me.