High Marks All Around for ‘Elegant’ CNN GOP Debate From Tapper to Ted to Trump; Here’s Why
Opinion

High Marks All Around for ‘Elegant’ CNN GOP Debate From Tapper to Ted to Trump; Here’s Why 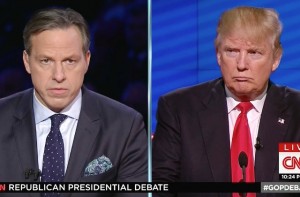 And on the 12th debate, the Republicans finally grew up.

That is the overwhelming takeaway of last night’s positively substantive debate on CNN. Personal attacks were replaced with explanations around policy differences. The bar was finally raised. The political class on Twitter — the same ones pontificating for months about a need for elevating the rhetoric — couldn’t have been more disappointed with what they were witnessing.

We’ll get the grades out of the way early largely thanks to repetition on the final marks:

Lead Moderator Jake Tapper: A. As noted in this space in September, wasn’t a big fan of Tapper’s style deployed in CNN’s first GOP debate from the Reagan Library. Basic theme throughout the evening from the lead moderator: Candidate X said this about you, Candidate Y (reads quote). Respond to Candidate X. Felt it attempted to induce contrived confrontation, and Tapper is much better than that. We saw that much better part on display last night in Florida, as the questions were relevant, pointed and in some cases, unique (after 11 debates and countless Town Halls, the last part is easier said than done).

Example: Asking Rubio about climate change, a topic not broached in any of the previous 11 debates:

TAPPER: “Senator Rubio, the Miami mayor has endorsed you. Will you honor his request for a pledge and acknowledge the reality of the scientific consensus of climate change and pledge to do something about it?”

Rubio pivoted to focusing on policies that he said would result in killing jobs at a high cost before declaring, “The United States is not a planet. It’s a country.”

TAPPER: “Just to clarify: When the Republican mayor of Miami, he’s saying the scientific consensus is that man does contribute to climate change. When you talk to him, because he’s the mayor of Miami, and he endorsed you, you say he’s wrong?”

RUBIO: “I would say there’s no law we could pass that would have an impact on that. If you took the gift list of every one asking us to pass these laws, there would be no change. It would continue to go on.”

Tapper would later admit the civility caught him — just like the rest of the world — off guard. But seemingly realizing that while the Jersey-Shore-meets-UFC 12 entertainment seen in most of the other GOP debates made for more viral soundbites and therefore grabbed more cheap attention, he had something new and refreshing on his hands and let the professional tone carry the evening. That takes instinct and knowing what hand you’re dealt. Tapper comes up aces here, as did his team including Dana Bash, Hugh Hewitt (Salem Radio), Stephan Dinan (Washington Times and the owner some tremendous hair).

Marco Rubio: A. Got the message that one doesn’t outdo Trump by being a cheap knockoff of the original (only Valarie replacing Brenda on 90210 has this ever successfully been accomplished). Went back to being the old Marco whom the pundit class always awarded best or runner-up in terms of debate performance for all events leading up to that disaster in New Hampshire. Of course, it’s almost certain this is a matter of too-little, too-late (even if he wins Florida, which is doubtful, and there’s not much a path from there anyway). Chalk this up to a learning experience for the freshman senator, and one we’ll likely be hearing from again in the 2018 Gubernatorial race in the Sunshine State no matter how things turn out next Tuesday.

John Kasich: A. Thankfully ditched sharing his Dad was a mailman… it’s impossible to not jump to Cliff Clavin or Newman! in those situations. Levity aside, Kasich has been particularly solid lately both in Town Halls and recent debates because he no longer looks pressed for time as a result of having less of a stage to share, and therefore has space to show off how knowledgeable he is on all-things domestic and foreign. The only thing that hurt him last night, ironically, was the civility… only because it didn’t allow him to stand out as the only adult in the room. Either way, say hello to your VP choice regardless of who wins the nomination.

Ted Cruz: A. Also stayed away from the sophomore year stuff. Telling moment: Dana Bash asks Cruz if he had just compared Trump to Hillary Clinton on the billionaire’s plan to put “smarter people in Washington”. Cruz seized that quote as an example of Trump’s preference for centralized government solving problems (a stretch), channeling his inner-Reagan by calling it a “statement of a liberal who doesn’t understand government is the problem.”

BASH: “Did you just just compare Donald Trump to Hillary Clinton on this issue?’

CRUZ (not taking bait he would have in the past): “I will let Donald speak for himself.”

The more you listen to Cruz, the more you realize just how in command the Texas senator is on most issues, particularly as it pertains to the Constitution. You may not agree with his positions, but anyone paying attention can’t claim he isn’t ready to assume office because he’s out of his depth (working with others may be other issues, but still…). And any awkwardness some may have felt in watching and listening to him may be dissipating if all the states he’s winning and endorsements he’s suddenly receiving (Carly Fiorina, Mike Lee) are any indication. Once seen as unacceptable by the establishment, he is now its best hope — and arguably a more acceptable option — in defeating Trump.

Donald Trump: B. Finally did what I recommended he do last week before the Fox debate: Act like a frontrunner, act presidential. Put away the sack of insults and provide some reassurance to all of those independents and Democrats you’ll need to convert to win that you have the temperament and maturity… hell, the sanity… to handle the job. Trump did just that last night. You could practically feel him giving into the urge to attack, but gathered himself and went back to policy (albeit general policy, but that’s worked to this point). Arguably his best performance on this kind of stage thus far…

But — and this is a big but — there’s a clear pattern in Trump’s answers in these recent debates that feature fewer candidates and therefore more airtime/questions asked: He repeats himself and/or circles back to the same point. Devoid of details, Trump simply states the same overarching themes and stretches until he’s saved by the buzzer. In a general election debate, the time to answer will only be longer. Details will be needed. He better seriously bone up between now and then if he ends up winning the nomination, which is looking pretty likely right now.

Whomever convinced these four guys (OK, three) to carry themselves in this manner: A++++++++. Hopefully it will be revealed who got Trump, Cruz and Rubio in a room (Kasich was likely excused from this conversation) and said “You’re killing any chance any of you have to win in November by acting this way. Agree to stop or nobody is leaving.” It’s just impossible to believe the three independently decided to not attack. An agreement HAD to be made. The question is, who actually owns that kind of influence?

“I just found it to be a very elegant evening,” Trump observed in a CNN post-game interview.

Elegant. That’s a word no one would have expected to describe the evening.

Adding one more: Exceptional… on all fronts.