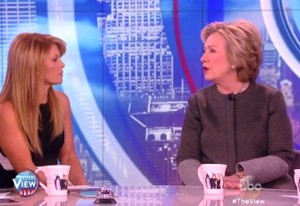 Former Secretary of State and current Democratic frontrunner Hillary Clinton has political capital to spare on the issue of reproductive rights, which might come in handy right about now. After taking heat over her word choice in a recent interview, Hillary courted voters on ABC’s The View by asserting that being “Pro-Life” and a feminist are not mutually exclusive.

Hillary explained her views on choice, and that she has “no problem with people making the case, look, here’s the best choice or here’s a better choice, but when the government gets involved or when you say it’s illegal and women and doctors are criminals, that’s way too far for us.” Then, conservative co-host Candace Cameron Bure asked Hillary if that means a person can be “Pro-Life” and also be a feminist, and Hillary apparently forgot what “Pro-Life” means:

Bure: Do you believe you can be pro life and a feminist?

Clinton: Yes, I do, absolutely.

Clinton: No, absolutely. look, I’ve been — and I’m sure that Whoopi and Joy have been — we’ve been in these conversations now for, what, 40-plus years, right? And I respect the opinions and beliefs of every woman. The reason why being pro choice is the right way to go is because it is a choice, and hopefully a choice that is rooted in the thoughtfulness and the care that women bring to this decision. So of course you can be a feminist and be pro life.

There are, of course, two huge problems with this, the first being that the “Pro-Life” political movement is explicitly not about “making the case, look, here’s the best choice or here’s a better choice,” it’s explicitly about the government getting involved and making the choice for you. The second, smaller problem is that even accepting their “pro-life” nomenclature is a tacit assertion that pro-choice people are somehow not pro-life.

The spirit of Clinton’s remarks, that feminism can respect every woman’s own choice, is lost in the translation, and it will definitely not go unnoticed. Hillary has the backing of every major reproductive freedom organization, but at a minimum, the remarks evoke the old triangulation charge.