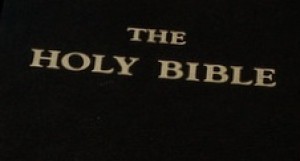 While cries of “Liberal bias!” are nothing new, especially to a media blog, it seems the religious right may have bitten off more than it can chew this time.  Targeting MSNBC, CNN, or even the New York Times is one thing, but apparently there’s an “in the tank” source bigger than all of them: Almighty God.

At first blush, you might think they’re trying to fend off more recent translations like the “Good News Bible,” or some ultra-PC Gay Bible.  Nope.  The Conservative Bible Project, despite all evidence to the contrary, is not a joke.  The “brainchild” of the Conservapedia, the project seeks to translate the King James Bible into a version that’s devoid of “liberal bias.”

It gets funnier, though.  The project cites “lack of precision in the original language” as one of the reasons this new translation is necessary.  The ultimate in hubris, though, is their actual attempt to rename God, preferring “the word ‘Lord’ rather than ‘Jehovah’ or ‘Yahweh’ or ‘Lord God.'”

And how does this intrepid group plan on besting the Holy Trinity?  Wikipedia-style!  The translation has already begun, which gives us unique insight into how the Bible was probably originally written.  It’s certain that, as with John Chapter 3 verse 33, John probably got assessments from God like “This needs work.”

In fairness to the right, it is difficult to imagine any mainstream conservatives, or Christians, signing on for this.  I asked my friend Ed Morrissey, who qualifies on both counts, what he thought of the project.  He gave me a preview of what he’ll be posting on the subject later:

It depends on how one considers the Bible.  If a person just views it as a series of parables with immense wisdom on life and truth but written by men for their own purposes, then a “conservative version” is as objectionable as making 10 Things I Hate About You from Shakespeare’s Taming of the Shrew — which is to say that the offensiveness depends on the final version.  (For the record, I liked 10 Things, which I thought was both a clever and goofy take on the Bard, so that’s not a dig.)

However, if one believes the Bible to be the Word of God written for His purposes, which I do, then the idea of recalibrating the language to suit partisan political purposes in this age is pretty offensive — just as offensive as they see the “liberal bias” in existing translations.

I agree with Ed that this is offensive, and I’d even say this might merit a lightning strike or two.  The creators of this project seem to either know this and don’t care, or have failed to understand their own page:

You have been warned.