House GOP Turns on Cruz: ‘Wendy Davis Has More Balls’ Than He Does 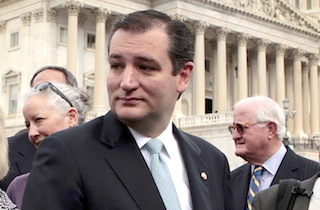 Texas Senator Ted Cruz incurred the wrath of a good number of Republican legislative aides on Thursday when he kicked the defunding-Obamacare ball right back into the House GOP’s court.

Cruz has been pushing the defund Obamacare movement for months, but after House Speaker John Boehner decided his caucus would go along with his plan and pass a budget without Obamacare funding, Cruz suddenly balked, admitting he didn’t have the votes to pass the bill in the Senate. In a statement written along with fellow would-be defunders Marco Rubio and Mike Lee, he wrote:

Harry Reid will no doubt try to strip the defund language from the continuing resolution, and right now he likely has the votes to do so.

At that point, House Republicans must stand firm, hold their ground, and continue to listen to the American people. President Obama has already granted Obamacare exemptions to big corporations and Members of Congress; he should not threaten to shut down the government just to deny those same exemptions to hard-working American families.

Here’s what some anonymous GOP aides had to say about that, the first two via CNN, the next three via HuffPo:

Cruz, for his part, had a pithy rebuttal to the criticism: