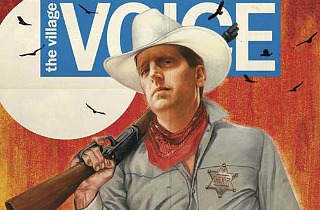 While it’s not quite an endorsement, The Villiage Voice’s glowing profile of a New York’s Superintendent of Financial Services, Benjamin Lawsky, might as well be. The effusive praise heaped on the actions of this zealous financial regulator is not out of place in a paper which regularly praises financial regulations of all stripes, regardless of their merits. But while Lawsky might appreciate this write up in The Voice, Lawsky joins a cast of bad actors who have also been on the receiving end of The Voice’s uncritical acclaim.

The profile follows some familiar patterns of left-wing beatification. Establish the subject’s anti-free market bona fides, note that they have all the right enemies (in this case, conservative London Mayor Boris Johnson) and friends (Sen. Elizabeth Warren [D-MA]), and paint the individual in the spotlight as a tireless warrior for the abused victim class of the moment.

You get the gist.

The Voice’s dubious nod of praise is one Lawsky might have been smart to politely decline. The publication has also heaped praise on loose affiliation of September 11, 2001, conspiracy theorists who call themselves “truthers”:

“It’s easy to dismiss the odd characters. It’s harder to ignore the regular guys in the room, or the polls showing that 49 percent of New York City residents believe the government knew about 9-11 before it happened, or the rock-solid certainty of these supposed doubters,” The Voice published in February, 2006.

“Its name notwithstanding, the 9-11 Truth movement tells a story—and is a story—about what happens when the government lies,” the profile continues. “The long list of obfuscations and obstructions has helped the Truth movement attract sympathizers who don’t buy the idea that the attacks were planned by the government.”

“If the heavy-handed policing was familiar, the armchair-media’s treatment of the anniversary was also mostly indistinguishable from the tone of the movement’s press coverage throughout the past year: The movement is over; it was silly; it didn’t accomplish anything; what remains are just a band of crusty shiftless die-hard malcontents,” The Voice published on the one-year anniversary of the establishment of the Occupy Wall Street movement.

Much of the rhetoric coming from the anniversary’s organizers was true to character too, ambitious to the point of bombast, promising to “Shut down Wall Street.” But for the protesters, yesterday’s actions and the weekend of trainings, teach-ins, and concerts that preceded it were never about actually bringing the financial industry to its knees, or even returning Occupy to the position it held before it was evicted from Zuccotti Park in November.

“Where are the First Amendment’s establishment warriors as government-spooked businesses try to shut down Wikileaks?” The paper’s executive editor, Michael Lacey, demanded in 2010 in a call to members of the media to show more support the efforts of an organization actively publishing American national security secrets and intelligence gathering techniques. “Hackers with computers, not hacks with press passes, have been the first line of resistance.”

The paper has also shown the light of their favor down on such paragons as the late Venezuelan dictator Hugo Chavez and unrepentant Weather Underground terrorist Bill Ayers.

“Imagine the new President explaining to the American people that, to pay for his invasion of Iran,” The Voice published in November, 2008 (yea, imagine that?).

“The Bush tax cuts he once proposed to make permanent will have to be replaced by McCain tax increases,” the paper continued, perhaps never envisioning that a Democratic majority in Congress and liberal president would extend those tax cuts.

“Imagine him explaining that, until those new oil reserves he despoiled ANWR to find come through — many years down the road — gas will continue to be ridiculously expensive, and that this sacrifice is nothing compared to the years he spent as a prisoner of war,” the paper’s embarrassing prediction-fest continued. “By the time this cluster-fuck winds down, the nation may be ready for President Bill Ayers.”

Then, there is this vomit-inducing example of unqualified praise for Chavez with a dollop of disdain for America’s clandestine services:

“Chávez, who served time for leading his own failed coup back in 1992, was democratically elected to preside over the world’s fourth largest producer of oil. Still, he has a caudillo strut; the hero of rallies where a thousand Che posters bloom, he delivers anti-globalist rhetoric with a definite Cuban backbeat. Thus, waging class warfare against an oil oligarchy that controls five of the nation’s six TV channels, he nearly fell victim to Bushie petropolitik. Shades of September 11—September 11, 1973, that is—when the CIA orchestrated the overthrow of Salvador Allende. Barely considered newsworthy in the Belly of the Beast, the Chávez story is a gripping narrative that played out on TV and in the streets, as well as inside the presidential palace, where the filmmakers, working on a Chávez profile, happened to be.”

And, of course, what government regulator wouldn’t seek the endorsement of a paper recently under pressure from a bipartisan group of U.S. Senators asking the Village Voice Media to explain why ads for a group accused of trafficking minors for sex appeared on one of their websites.

The parody of progressive activism that is The Villiage Voice might resonate with some, but I would not count on it to do wonders for Lawsky’s future political career in New York.

[Photo via The Village Voice ]