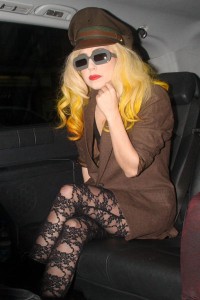 Like any good pop diva, Lady Gaga is constantly reinventing herself. First she tried the club kid chic look, then took to pyrotechnic hosiery – but it looks like her newest incarnation is military-themed: she was the commander-in-chief of an all-male naked army in her video for “Alejandro,” and soon after she appeared on the cover of the General McChrystal-ousting issue of Rolling Stone with heavy ammunition on her chest. And now a new implication in the developing Wikileaks investigation is adding some credibility to her army shtick.

Logistically, how did Manning use Gaga to pull of his data heist? Since November 2008, computers operated by the Pentagon or the armed services have had their external hard drive portals disabled to prevent occurrences like this. However, Defense Department personnel are still permitted to use the CD players that are built into the computers, and Manning popped in a disc capable of holding data files and told everyone he was just a devoted Little Monster. To make his story more believable, Manning “hummed and lip-synced to Lady Gaga songs” to appear as though he was actually listening to music rather than covertly stealing government records.

According to the article, “Another line of inquiry is expected to look at whether digital red flags were raised, or should have been raised, by Private Manning’s actions.” It’s funny that in this day and age, a soldier singing aloud to Lady Gaga while fiddling around on an army computer chock full classified government data is not considered to be suspicious at all until he gets caught stealing top-secret information.