Howard Kurtz Has Hopefully Started the Backlash Against the TSA Backlash 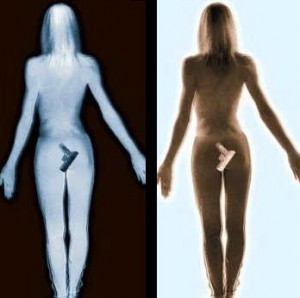 For a little over a week, an eternity in news cycle dog years, the uproar over TSA pat-downs has dominated the media landscape like the bastard spawn of Rod Blagojevich, Sarah Palin, and Balloon Boy. Heading into the Thanksgiving weekend news dead zone, there seems little chance its momentum will slow, but The Daily Beast’s Howard Kurtz may be ushering in the most welcome phase of this story’s arc: the inevitable backlash against the TSA backlash.

Kurtz mostly nails it in his critique of “The Media’s Pat-Down Frenzy,” but misses a key cog in this story’s engine: the intersection of public outrage and proponents of racial profiling.

Kurtz accurately traces the story’s Drudge-watered roots, a viral video by software engineer/hardware protector John Tyner in which he tells a TSA screener, “If you touch my junk I’ll have you arrested.” Tyner likened the pat-down procedure to a “sexual assault,” an absurd bit of hyperbole that should have earned him a bitter rebuke from anyone who has ever actually been sexually assaulted, or by anyone who has ever been frisked. I’ve been patted down before, and since my chest is now held together with wires, I’m sure I will be again. It’s a commonplace occurrence for anyone who accesses secure areas, and while a first-timer can be forgiven some discomfort, it is surprising that Tyner’s metaphor went unchallenged.

From there, it was off to the races, and Kurtz cannily observes the atmospheric conditions that led to the media cyclone:

The narrative combines a number of elements: Hassled airline passengers (who can’t relate to that?); terrorism concerns; invasion of privacy, and a hint of sexual naughtiness. But the key here is that every local news outlet in America could send a reporter or a crew to a nearby airport and grab a piece of the action.

To be sure, they found a few revolting cases.

Indeed, they did, but as TSA administrator John Pistole (an unfortunate name for this junk-centric story) pointed out over and over, these were aberrations from the standard procedure. In addition to the anecdotal horror story, the Junk-gate beast munched hungrily on empty calorie sound bites like Hillary Clinton‘s declaration that she wouldn’t submit to a pat-down (but ignored her eminently reasonable qualification “if I could avoid it. Who would?”), and instant celebrity-seeking opportunists like the scanner-proof underwear guy and the hot TSA stripper girl with the see-through lingerie and utter lack of video-editing software.

To be sure, practices such as these pat-downs should be monitored vigilantly for abuses, but Kurtz correctly takes the media to task for a lack of perspective:

The obtuseness of these TSA clowns boggles the mind. And in the modern media world, anecdotal accounts rule. Perhaps some customers, not the disabled ones, were being oversensitive; doesn’t matter. We all identify with bedraggled passengers, having removed their shoes and belts, having dumped their drinks and packed their tiny toothpaste tubes, being oppressed by a rigid and inflexible system. But that doesn’t mean the excesses are widespread.

Kurtz also tackles questions about the efficacy of the Advanced Imaging Technology (AIT) machines, but such concerns are more resonant before the fact than after. The machines were already being rolled out when last year’s Christmas Day bomb attempt occurred, revealing the machines’ weakness at detecting the explosive PETN. Lost in the angst over this is the fact that screening measures have forced the terrorists to use PETN, a substance that doesn’t work. The only successful use of PETN as a primary explosive was an attack that killed 1 and injured 23, and that took 24 kilos of the substance to accomplish. It takes a 50 lb set of balls to ignore this.

Tyner, among others, has also raised the possibility of using so-called “puffer machines” to detect PETN, but the TSA abandoned that program before the Undiebomber because those machines didn’t work.

Whether the expensive machines  and pat-downs are worth the investment becomes somewhat moot, however, once you’ve already made the investment. How does TSA put that genie back in the bottle? If they abandon these measures, how does John Pistole explain that to the families of the next airline disaster that might have been prevented by them?

Kurtz’s deft critique swings and misses at an important element of this story in his conclusion:

On the other hand, it seems absurd to be screening grandmothers and young kids, and has this elaborate and expensive enterprise caught a single terrorist?

No self-respecting man wants a hyperactive security guard touching his junk. But I’ve about had it with media types who insist on turning this into a junk story.

This is really at the heart of the TSA whine-fest. True abuses aside, the loudest complainers have one thing in common: they don’t care so much about privacy as they do about their own privacy. While The Atlantic’s Jeffrey Goldberg invokes the mythical non-racial profiling of El Al, conservative provocateur Ann Coulter cuts through the bullshit and just comes out and says it: profile the Moose-lims. Every single interview I’ve seen on this subject has included the “Kids ‘n Grandma” code for “Don’t do it to us” (John Tyner is neither, though it’s hard to tell from the whining), and every panel has proffered the El Al model as a worthy replacement for our current system.

There are a host of problems with this, but the most insidious is the notion that it doesn’t involve racial profiling. This is achieved through verbal sleight of hand, by saying that El Al doesn’t “simply” rely on racial or ethnic profiling, they imply that the Israeli airline uses techniques like “behavioral profiling” (aspects of which are already in use here) to narrow the number of people scrutinized, when in reality, the opposite is true:

Despite their current anxieties, Americans also might balk at El Al-style ethnic profiling. Staff scrutinize the passengers’ names, dividing them into low-risk (Israeli or foreign Jews), medium-risk (non-Jewish foreigners) and extremely high-risk travelers (anyone with an Arabic name). These people automatically are taken into a room for body and baggage checks and lengthy interrogation. Single women also are considered high-risk, for fear they might be used by Palestinian lovers to carry bombs.

Such profiling ignores the fact that the terrorists are actively recruiting outside that profile, and heavy reliance on it would actually make us less safe. The TSA was rightly derided for chasing the terrorists’ tail by scrutinizing shoes and shampoo, but this appears to be an attempt to get ahead of the evildoers. At yesterday’s White House briefing, Robert Gibbs tried to point this out without showing our hand: (Transcript via email)

Jake Tapper:   You’re a parent.  The President is a father.  There are a lot of parents out there whose children have been subjected to pat-downs, and they’ve been very upset by it.  There have been individuals with medical conditions who have been forced into humiliating situations.  This is evolution?

MR. GIBBS:  No, I think it’s important to understand that anybody under 12 goes through something much more modified.  I would say, first and foremost — and I think if the TSA Administrator was here, he would say this to you as well — has all of this been done perfectly?  No.  If somebody feels as if they have been unduly subjected to something that they find to be far more invasive than the line of convenience and security, they should speak to a TSA representative at the airport.

Again, without leaning too far into this, Jake, I think it’s important that it’s not out of the realm of possibility to think that — I’m trying to be somewhat careful here — that those that wish to do people harm via an airplane haven’t looked at some of the ways through explosives in devices or luggage or on themselves that we know can get around and through security.  And we have to be careful about that.

Whether they’re acting on specific intelligence or not, it only makes sense that if a terrorist knows we’re not going to search Grandma, a halfway-decent pickpocket could smuggle a weapon aboard an airplane simply by getting behind her in line. A pregnant woman from England might well become a viral video star in today’s climate, were she subjected to enhanced screening, but that’s the danger of reactionary policies. When discussing the Israeli model, it’s important to note El Al’s success at catching people who don’t fit the profile:

Other catastrophes have been averted since. One bomb was found in 1979 in Zurich in the bag of a German passenger who looked nervous: He had thought he had been hired to smuggle diamonds. Another bomb was discovered a few years ago in the bag of a pregnant English passenger in London, placed there by her Palestinian lover, whose identity security officials had checked beforehand.

In fact, the current white-hot furor over the screening procedures could act as a deterrent for terrorists, who might think twice about making a move during a time of such heightened awareness. Bowing to public pressure at a time like this might have the opposite effect.

Since the Christmas Day bombing attempt last year, the government has continued to work on improving intelligence efforts, with some recent success, but our airports are the last line of defense. I hope the TSA busts some heads over the misuse of screening procedures, and comes up with better detection equipment, but if properly executed, the current procedures don’t step over the line between privacy and security. Hell, if the TSA really wants to keep an x-ray of my junk, I’ll even autograph it for them.

See, here’s the real elephant in the room: all the nekkid body-scanners, and puffer machines that don’t work, and color-coded alert systems, and pat-downs, and even profiling, will never eliminate the threat. The truth is, we can be safer, but never completely safe. The actions of terrorists, especially suicide terrorists, are anomalous to human nature, even to dark-sided human nature. Even “bad” people have an instinct for self-preservation, and even most killers don’t kill indiscriminately. For a person who doesn’t care who he kills, including himself, the whole world will always be a target-rich environment. The best way to stop them is to either kill them before they can act, or to make them not want to do that.