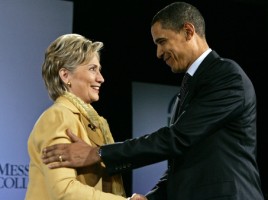 She may not have won the Democratic nomination, but Hillary Clinton is now more popular than Barack Obama. According to a new Gallup poll, Obama’s favorability rating is now 56%, versus the Secretary of State’s 62%. In January, Obama led Clinton 78% to 65%. In many respects, it’s easy to see why: as always, the media is partly to blame.

It’s nothing new for elected presidents to be seen less favorably once they assume office; in fact, it’s expected. But the unusual highs that Obama experienced going into his inauguration set him up for a big fall. The media always has an incentive to go after the sitting president, no matter who that president is: there are better stories that way.

Obama, for his part, has given them plenty of ammunition. He came into the job with a tough road to hoe, and the slow progress (or lack of progress) on health insurance, the economy, and the wars in Iraq and Afghanistan opens him up to criticism from the left that he’s “a frightened man,” a moderate waffler, and to criticism from the right that … well, take your pick. He’s a bully, he’s a wimp, he’s a professional teleprompter reader, etc. You know that you’re in trouble when SNL says that you haven’t accomplished anything.

As this plays out in the media, even critics who complain that CNN, MSNBC et al. aren’t doing their jobs and speaking truth to power will have to concede that right-wing outlets like Fox and conservative talk radio — the most viewed and most listened to in their respective fields — aren’t pulling any punches. Which may be why the White House has as much as declared war on Fox.

Clinton, by contrast, gets to sit in the shadows and enjoy a) the goodwill of those who think that maybe she should’ve been president after all, and, more importantly, b) a reprieve from the harsh media spotlight. We wonder if she’s regretting her remarks on the Today Show now:

Will you ever run for president again?” Curry asked.