‘I HAVE NOTHING TO DO WITH RUSSIA’: Trump Continues Bizarre Defense Over Unverified Report 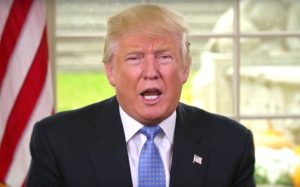 At the speed of Twitter likes and retweets, an admittedly unverified single-sourced story was published by Buzzfeed on Monday detailing, in part, salacious details that the Russians allegedly have that are compromising to the President-elect.

Unsurprisingly, the full Trump team has been in strong denial mode since the story broke; one of the implicated few in the dossier — Trump’s lawyer Michael Cohen — even took to his own social media in an attempt to extinguish the flames. All morning, Kellyanne Conway and Reince Priebus have done the rounds on the morning shows to slam Buzzfeed’s decision to publish the document, which Priebus called — and I quote — “phony baloney garbage” on Morning Joe.

And although he is just hours away from his first press conference since July, President-elect Donald Trump himself has taken to his own favorite platform to vehemently deny any of the accusations, including reports from CNN that the intelligence community briefed both President Obama and PEOTUS Trump on the existence of the compromising materials.

Trump’s response was to bizarrely and brazenly jam on the CAPS LOCK button hard and make it clear in no uncertain terms: “I HAVE NOTHING TO DO WITH RUSSIA.” He also, strangely, cites the Russian response to the story.

Russia has never tried to use leverage over me. I HAVE NOTHING TO DO WITH RUSSIA – NO DEALS, NO LOANS, NO NOTHING!

Now of course, the phrase “fake news” is weaponized with partisan rancor, no longer referring just to the spat of conspiratorial headlines, but easily thrown around in an attempt to deflect from anything remotely damaging. Just minutes after his initial defense, he continued:

I win an election easily, a great “movement” is verified, and crooked opponents try to belittle our victory with FAKE NEWS. A sorry state!

Intelligence agencies should never have allowed this fake news to “leak” into the public. One last shot at me.Are we living in Nazi Germany?

“Are we living in Nazi Germany?” he remarkably concluded, showing that Godwin’s Law really looks like when invoked by a soon-to-be President. Shortly before President Obama’s final farewell speech from Chicago Tuesday night, the Buzzfeed story broke; Trump didn’t wait long to try and get ahead of it right then and there, also using his all caps declaration.

The President-elect is likely to face at least a question or five about Russia during his press conference today.