‘I Think I Am Listening to a Mad Man’: Errol Morris Discusses His Rumsfeld Documentary
QUAGMIRES

‘I Think I Am Listening to a Mad Man’: Errol Morris Discusses His Rumsfeld Documentary 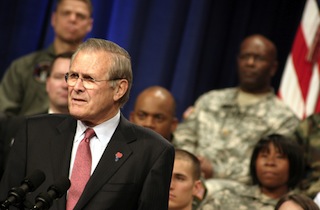 “I’ve made a lot of movies about self-deception over the years,” filmmaker Errol Morris said during a Q&A Wednesday evening following an IFC screening of his new documentary The Unknown Known, “but nothing that comes close to this.”

The “this” is former Defense Secretary Donald Rumsfeld, who inexplicably — as in neither Morris nor Rumsfeld himself can explain why — agreed to be the subject of Morris’ new documentary, which hits theaters next week.

The Unknown Known is in almost every way a followup to Morris’ Oscar-winning The Fog of War, in which a previous Defense Secretary performed a postmortem on a previous disastrous military conflict. The difference: Robert McNamara was, in Morris’ words, “reflective, tortured, involved in an attempt to figure out why he did what he did.” Rumsfeld, meanwhile, has disappeared behind the performance of himself. Eight years after he was finally fired by George W Bush, the architect of the Iraq War is still selling his “little understood” battle.

The resulting film chronicles “Donald Rumsfeld’s dream about himself.” Morris dug through tens of thousands of Rumsfeld’s memos — called “snowflakes,” as they dusted down upon subordinates in endless leaves of white paper — and gathered hours of footage of his charming but cocky press conferences, where arose many of Rumsfeld’s unintentionally self-revealing statements: unknown unknowns, I don’t do quagmires, absence of evidence is not the evidence of absence, and so on.

“Here is someone using language to fool himself as well as others,” Morris said. He pointed to a scene in which Rumsfeld consulted the Pentagon Dictionary (there is such a thing!) on the definitions of “insurgency” and “torture” to prove that such terms didn’t apply to his war. If Rumsfeld didn’t like the things he was accused of, he summoned codices that provided him with exculpatory definitions of the charges.

He did the same to history. “In every war, things occur which shouldn’t occur,” Rumsfeld said of Abu Ghraib. Vietnam was an “unsuccessful effort,” torture an occurrence that was “not proper,” Pearl Harbor a “failure of imagination.” Even proposing to his wife, which he admits he did not want to do at the time, “was correct. It was a good decision.” Slowly, revision by revision, Rumsfeld’s agency is read out of the results of history. He’s never been wrong; it’s just that, in one of his most-remembered lines, “stuff happens.”

Morris interjects with facts. When Rumsfeld acts as if no one on planet earth ever believed Saddam Hussein was connected to 9/11, Morris reads a Washington Post poll that found almost 70% of Americans believed it at one point, and plays a clip of the former Defense Secretary arrogantly making the case himself; Rumsfeld shrugs and refuses to believe it. Later, after Rumsfeld has called Morris crazy for suggesting that the “enhanced interrogation techniques” of Guantonamo Bay migrated to Abu Ghraib, Morris quotes a congressional report that affirms exactly that; Rumsfeld agrees without revising his earlier statement. “Here is a man who can say contradictory things without batting an eyelash,” Morris told the crowd Wednesday evening. “I think at the end I am listening to a madman.”

During the Q&A, a sanctimonious pair of questioners tried to condemn Morris for “letting Rumsfeld off the hook” by refusing to confront his “massive lies”; after all, he had the man sitting right there! Morris had no truck with such criticism. He happily conceded that he thought Rumsfeld a war criminal who should be held accountable for his actions, but that wasn’t what he was after.

Rather, he was searching for the real Rumsfeld beneath the constant obfuscation — assuming, of course, there was a real Rumsfeld left, which Morris didn’t believe there was. “Sometimes, in discovering the absence of something, you discover something,” Morris said, in a line that could have easily been spoken by Rumsfeld himself.

The Unknown Known opens on April 4 in theaters and on iTunes; in the meantime, Morris is running a four-part essay in the New York Times providing additional material on Rumsfeld’s protean “philosophy.” Watch the trailer below: