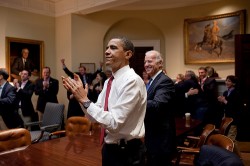 Does it seem weirdly quiet in the news world today? It’s not just your imagination. The media may be having a collective panic attack over how they will manage to occupy their time now that the health care debate has been settled. And make no mistake, as a national “nuclear” storyline this one is likely done. As former Bush speechwriter David Frum noted in his much passed-around piece today: this “Waterloo” is the result of the GOP not managing to cooperate on any level with the Dems. Meaning, if that’s the storyline that sinks in, the GOP may not spend a great deal of time focusing on their failure to present a workable alternative.

And people love all of these details, lifting up the skirt of Congress and seeing what’s really going on. Honestly. And it reminds me actually of the recount in 2000. It reminds me of the Democratic primary race, where we basically were getting a civics lesson.

That’s called the President hitting the nail on the head. Without question Obama is currently the comeback kid. But what’s next, because this is not going to last very long? The Times today did a story about how Obama’s big failure thus far has been his inability to unite Washington, something possible 2012 candidate Mitt Romney immediately picked up on (also, John McCain, in his own weird way). But I’m not convinced this extra strident partisanship isn’t in part the result of a media cycle that demands a scorecard. The cable/blogosphere beast must be fed.

I suspect, in light of yesterday’s mostly overlooked marches in DC, immigration may be next up. Or maybe it will merely be partisanship. That said, Obama has now marked himself the president who can accomplish anything, so maybe all this recent Israel back-and-forth will mean he’ll make a foreign policy switch and solve the Mid-East. Whatever it is it better be big, because if it’s not the media world will make it so. Or, hey, maybe it’s just more health care. Reliable Sources clip below.