If The Election Were Held Today Obama Would Lose

If The Election Were Held Today Obama Would Lose 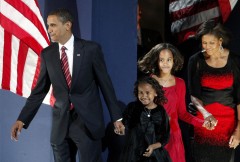 So yes. As the saying goes, what a difference a year makes. Twelve months after the momentous election of Barack Obama as the nation’s 44th president, a poll shows that were the election to be held today Obama might not be so successful.

Of course, it should go without saying that a poll like this is held in a vacuum, which does not include real world contributing factors like opposing candidates or running mates. Not to mention the next chance voters will get to check the President’s name off on a ballot is still three years off — needless to say, a lot can change in three years! — but still, probably not exactly the way Obama wanted to arrive at election day 2009!

For her part, Arianna Huffington, whose coverage of Obama during the campaign was generally, shall we say, positive, also appears to have decamped into the less-than-thrilled party. Huffington has penned a new post titled ‘The Audacity of Winning vs. The Timidity of Governing.’ From the post:

How did the candidate who got into the race because he’d decided that “the core leadership had turned rotten” and that “the people were getting hosed” become the president who has decided that the American people can only have as much change as Olympia Snowe will allow?

The audacity of reality? No doubt the difference the next 36 months can make will help people make up their minds on that one.