In 1994, Axelrod Gave Same Advice To Bush 41 That He Rejects For Obama Today 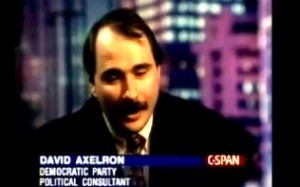 In a C-SPAN interview from 1994, senior campaign advisor to President Barack Obama, David Axelrod, admonished the losing campaign of President George H. W. Bush for touting an economic recovery that most Americans could not identify with. Axelrod said that Bush’s campaign message ended up “frustrating this alienated middle class more.” Axelrod’s observation from 1994, however, exposes his awareness that Obama is in the precise same predicament today.

“As you cite these statics that say the economy is improving, you almost do political damage to yourself,” said Axelrod. “If you stand up and claim great progress, you’re only frustrating this alienated middle class more.”

Those are almost the exact recommendations that were given to the Obama campaign by pollster Stanley Greenberg and Democratic strategist James Carville after they conducted a focus group with independent voters in Pennsylvania and Ohio.

Their focus group showed that not only were independent voters not responsive to the Obama campaign’s highlighting various sectors of the economy that had improved under his watch, they were made frustrated and even angered by the very attempt.

“It’s like how things are getting better? Where?” said one woman in the Ohio focus group. “I don’t see it. Makes me mad.”

An ad from the Obama campaign that touted the President’s bailout of the auto industry was particularly counterproductive and inspired a lot of “resentment.”

“Women in particular did not see how it related to them, and even some men working outside manufacturing thought it left them out,” reads the report. One woman said that the Obama administration’s moves were great “for the autoworkers, but where does that leave my grandchildren?”

Obviously, a seasoned political operative like Axelrod is aware that his observation was as true for George H. W. Bush in the early 1990s as it is today for President Obama. As Greenberg and Carville note, “we will face an impossible headwind in November if we do not move to a new narrative.”

Easier said than done. But transition to a new narrative they must – as the memo notes, there are few avenues open to the Obama campaign but attacking the Republican party and their presidential nominee.

Romney is ripe for attack – but the Obama campaign has already neutered many of their most effective attacks against Romney’s record at Bain Capital and as Massachusetts governor by releasing them in Spring.

The memo notes that Romney’s owning offshore bank accounts is particularly damaging – you will know the Obama campaign has fired their last and most potent weapon when those attacks surface. Their problem is that they may be forced to use them earlier than they would have hoped.

Watch Axelrod’s interview below via C-SPAN: