Is The Media Giving President Obama A Pass On Continuing Bush-Era Policies?

Is The Media Giving President Obama A Pass On Continuing Bush-Era Policies? 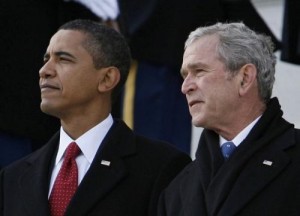 Remember the days when George W. Bush was hammered in the media for his vast expansions of executive power and tactics in the War on Terror™? Well, some in the liberal blogosphere have noticed a disturbing lack of consistency in calling out Barack Obama for using the same tactics, or even going beyond Bush-era policies. Several former Bush administration officials have noted the hypocrisy, and a POLITICO piece today chronicles several policy areas where Bush would have never gotten a pass like Obama has.

The POLITICO report, titled “What if George W. Bush had done that?” gives five clear examples of where media coverage was harder on Bush than Obama. Remember Eric Holder‘s defense of the targeted killing of Anwar al-Awlaki?

Last week, Attorney General Eric Holder visited Chicago to lay out his rationale that the U.S. government has the legal right to kill U.S.-citizen terror suspects overseas — and that there’s no role for the courts in reviewing such use of lethal force.

The speech at Northwestern University Law School drew a smattering of news accounts and a handful of reporters, but no protesters, no candlelight vigil and no audience members clad in orange jumpsuits and chains. Some liberal groups issued press releases taking issue with Holder’s analysis, but the reaction to what could be termed warrantless killing was a far cry from the sky-is-falling, apocalyptic rhetoric unleashed at Bush and his appointees a few years back over efforts merely to listen in on the communications of suspected terrorists through the warrantless wiretapping program.

Glenn Greenwald has been one of the only liberal bloggers being just as critical of Obama, and directly addressed the double standard in a column last month titled “Repulsive progressive hypocrisy.” Greenwald pointed out that Obama’s policies on counterterrorism and drone strikes have a surprising amount of support from “the left wing of the Democratic Party.” Mark Corallo, who worked in the Department of Justice under President Bush, said that “a little bit of consistency from the media would be appreciated” and asked “where is the outrage?”

And on prosecuting whistleblowers, Obama has been criticized from some corners as being worse than Bush. Prosecutors in the Obama administration have filed “more prosecutions [against whistleblowers] than under all prior presidents combined.” But…

The anti-leak drive and the potential for journalists to be caught in the crossfire is an occasional subject of news stories and editorials, but Bush officials are convinced they could never have gotten away with what has happened under Obama.

“If we were doing what this administration has been doing to reporters, we would be characterized as Nixonian, flat-out. People would say, ‘They have an enemies list in the media and are taking it out on them. …’ We would have gotten crushed. It would have been editorial after editorial and 24/7 on cable news,” Corallo said.

“This is a huge chilling effect on national-security reporting,” Greenwald said. If it had occurred under Bush, “this would be a major, major scandal.”

The piece also cites Obama’s massive fundraising, closed-door meetings with CEOs, and his golfing habit. So what do you think? Is the media giving Obama a free pass on policies they criticized Bush for, or has the coverage been mostly fair on both sides?