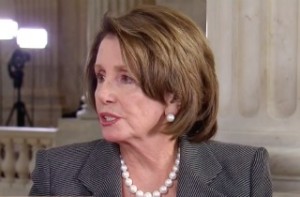 Ryan has argued that his party’s crushing defeat in the presidency and in Congress––the latter for several cycles now––means it’s time for a change. He recently wondered how bad things have to get for Democrats to realize that.

Ryan has received a couple of endorsements so far.

Pelosi gave an interview to The Huffington Post yesterday with her most notable reactions to Ryan so far, remarking, “He didn’t even carry his district for Hillary Clinton.”

Ryan said Democrats need someone who can “go union union halls and fish fries and churches” and engage with average Americans. Pelosi said she gets plenty of invites to union meetings and shot back, “I have strong support from our friends in the unions, including steelworkers, which I guess are his area.”

But as for the charge that Pelosi is just clinging to power, the Democratic leader had quite the reaction to that one:

“It’s so completely not true that it’s almost pathetic,” she told HuffPost. “You know, it’s just not― it’s not what it is.”

She said members have come to her and told her what kinds of changes they want. The process has been “liberating for me,” Pelosi said, because it’s given her the chance to shape leadership roles based on their input. “That gives legitimacy to whatever we do.”

The vote for Democratic leadership is tomorrow.