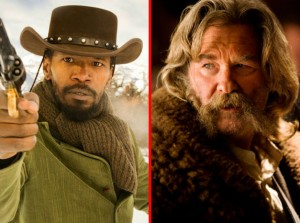 Actors Jamie Foxx and Kurt Russell have voiced their opinions regarding writer and director Quentin Tarantino‘s comments at an anti-police brutality rally, which caused several police unions in major cities to announce a boycott of his next film, Hateful Eight.

Tarantino told rally attendees that “if you believe there’s murder going on then you need to rise up and stand up against it. I’m here to say I’m on the side of the murdered.” Many, including Fox News’ Harris Faulkner and Bill O’Reilly, interpreted the director’s comments as suggesting that cops were murders. So too did the major police unions in New York, Philadelphia and Los Angeles, which all called for the boycott.

According to the Hollywood Reporter, Hollywood Film Awards presenter Jamie Foxx, who starred in Tarantino’s Django Unchained in 2012, told his former collaborator to “keep speaking the truth” and not to “worry about none of the haters” at Sunday’s ceremony.

When pressed on the matter at the ceremony, Hateful Eight star Kurt Russell told the Associated Press, “We all have a tremendous respect for what police do every day, putting their lives on the line, OK? And I know Quentin feels that way too.”

“Now when it comes to his comments on policemen that’s his to comment on,” he said. “You don’t have to agree every time with everybody to like working together.”

Whether or not Russell agrees or disagrees with Tarantino remains to be seen, though his comments suggest the actor wasn’t as supportive as Foxx.

Hollywood’s response to the matter comes on the heels of industry rumors that film producer Harvey Weinstein, who has produced most of the director’s films since Pulp Fiction in 1994, isn’t too happy with the backlash. Page Six reported that he is “angry that Tarantino needlessly created a controversy that has nothing to do with the movie” ahead of the late-December awards push.