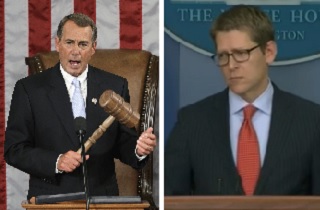 Things move fast in today’s microscopic news cycle, particularly with regard to the current ever-changing government shutdown/debt ceiling crisis. At Tuesday’s White House Daily Briefing, the lightning speed of today’s news media was demonstrated when Press Secretary Jay Carney disputed the truthfulness of a statement by Speaker of the House John Boehner‘s office, then was asked, minutes later, to react to a response from the Speaker’s office.

ABC News Chief White House Correspondent Jonathan Karl asked Carney about a report from a Boehner spokesman. “This idea of suspending the medical device tax, I believe it’s been referred to as a ransom payment for part of this deal,” Karl began. “The Speaker’s office is saying that this idea was actually proposed by White House staff in negotiations last week. Is that true or not?”

“That is not true,” Carney replied. “What we have always said is that discussions of the medical device tax or other elements within the Affordable Care Act that lawmakers want to talk about in an effort to improve the Affordable Care Act we are willing to have, but not in the context of or as ransom for opening the government. That is why a provision like that appears in the latest proposal that seems to be going nowhere from House Republicans — because it’s an effort to try to buy votes from tea party Republicans who shut this government down in the first place. And so there’s –”

” So just to be clear, they’re not telling the truth about that?” Karl interrupted.

“Again, that is not — the conversations that have been had here and up on Capitol Hill about the medical device tax, as far as we’re concerned, have been about our willingness — as the President said and others — in a broader context,” Carney said, “not ransom for opening the government, not ransom for Congress doing its job to pay our bills, but within the context of the President’s willingness to hear ideas about ways we can improve, as opposed to undermine or dismantle or defund Obamacare. We’re willing to have that. But we’re not going to pay ransom — the President is not going to pay ransom from the American people to the tea party in order to open the government.”

CBS Radio News’ Bill Plante immediately followed up, saying he wanted to “pin you down a little more closely. Thursday, the Speaker’s spokesman said specifically that a White House official asked for repeal of the medical device tax.”

“I’m not saying it’s in connection with any other part of the plan, but simply that it was asked for by the White House,” Plante persisted.

“You’re saying that separate from anything, the White House proposed a change to the Affordable Care Act?” Carney asked, somewhat incredulously. “Obviously, that’s not the case.”

Carney also pointed out that a repeal of that tax would add to the deficit, rather than reduce it, which Republicans say is their goal.

Plante took one more shot at it. “Just to be clear, in Thursday’s meeting, you’re saying…” he began.

“…no one here asked for repeal of the medical device tax?” Plante concluded.

Minutes later, Wall Street Journal White House Correspondent Carol Lee had a response from Speaker Boehner’s office. “Since you’ve been talking, a spokesman for Speaker Boehner has said that for you to say that a senior administration official in Thursday’s meeting did not proactively raise the medical device issue is astoundingly dishonest and that it was a senior administration official who proposed it in those talks,” Lee said, “So can you just clarify…”

“Nobody from the White House raised the issue?” Lee asked.

“No, no, what I — look, there have been conversations about the medical device tax because Republicans have been putting it on the table and others have been talking about it,” Carney said. “What we have always said is that we have never, ever proposed or agreed to pay ransom in exchange for opening the government. And the proposal that had a brief existence this morning, apparently, before I guess the tea party pulled it down, contained within it a demand to placate the tea party related to the Affordable Care Act in exchange for opening the government. And our position has always been we’re not paying ransom for that.”

“So, again, it is astoundingly disingenuous to suggest that our position has ever been that we’re going to pay ransom to the tea party in order for the Congress, for House Republicans, to open the government,” Carney concluded.