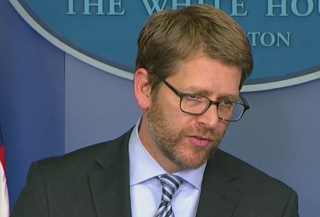 The incredible burden has been lifted from Jay Carney‘s shoulders now that he is no longer the White House Press Secretary, and in an exit interview with The New York Times Magazine, he opens up about what he thinks of the media’s “shallow” (and in the briefing room, “theatrical”) approach to covering the White House.

He reflected on his time as a journalist and how he viewed the profession on the other side of the dais, saying, “I’m proud of a lot of my work. But if I had known then what I know now, I would have succumbed less often to chasing the same soccer ball down the field that everybody else was.”

When asked to elaborate, Carney said, “I think the format reinforces a shallow approach.”

And of the press briefings themselves, the former press secretary said there is definitely a penchant for playing to the cameras.

If you look at the difference in tenor between the on-camera briefings and the on-the-record-but-off-camera gaggles, it’s night and day.

Carney also dismissed the idea that the Obama administration is the most secretive ever and has stonewalled journalists and prosecuted leakers at almost every turn.