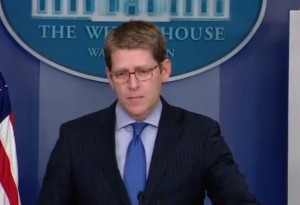 Despite a mainstream media push to dampen expectations for legislative movement on the most “contentious” of President Obama‘s proposals to reduce gun violence, the assault weapons ban, the White House continues to steadfastly insist that the measure be given a vote. At Wednesday’s daily briefing, White House Press Secretary Jay Carney was, again, invited to let Senate Majority Leader Harry Reid off the hook, and again declined, telling The Associated Press‘ Julie Pace that President Obama “thinks that the American people, understandably, expect Congress to vote on these important matters, to vote yes or no.”

The conventional wisdom around the President’s three central gun reforms is that universal background checks have a good chance of passing, limits on magazine size have a prayer, and the assault weapons ban cannot pass, despite overwhelming support for all three. The assault weapons ban faces the additional obstacle of Senate Majority Leader Harry Reid, who has repeatedly expressed hesitance about the measure, and can keep it from even coming to a vote.

In his speech on reducing gun violence Monday, the President continued to acknowledge the difficulty in passing an assault weapons ban, but also continued to insist that the American people are owed a vote on all of the measures, and during a gaggle aboard Air Force One, Jay Carney agreed, even if it meant “tough votes” for some Democrats. On Wednesday, Carney was asked about President Obama’s meeting with Senate Democrats at their annual retreat in Annapolis, and what his message to them would be on the assault weapons ban.

“That’s an issue that several Democrats have refrained from voicing their support or opposition to,” the AP’s Julie Pace said. “Is he going to push them to take this to the floor and have a vote on it?”

“The President firmly supports reinstatement of the assault weapons ban,” Carney replied. “He has long supported that. He understands that these issues are difficult, that achieving them will not be easy, but he is committed to pressing forward on them and to enlisting the support of lawmakers in both the House and the Senate of both parties in the effort.”

“Even if that means putting members of his own party in the position to vote against something that he supports or take a vote that could hurt them politically?” Pace asked.

“I think he thinks that the American people, understandably, expect Congress to vote on these important matters, to vote yes or no,” Carney replied, adding, “And he would hope that the Senate has an opportunity to do that.”

We all have a tendency to hear what we want to hear, and while the White House has talked the talk on making Congress vote on all of these measures, a cynic might also note that they have yet to respond directly to Harry Reid’s, and other Democrats’, reticence to be put on the spot. In fact, according to The Baltimore Sun, there doesn’t appear to have been any jawboning at that Democratic retreat today:

Sen. Ben Cardin said gun control and immigration came up in the meeting with the president, but not in depth. “It was a pretty candid discussion about economic growth, jobs…part of it was dealing with sequestration in a balanced way,” the Maryland Democrat said.

However, it’s a little bit too soon to expect the White House to walk the walk, and begin making public demands on Reid, rather than give Reid a chance to ease into the bathtub on his own. As Carney and the President have said, all Americans, whether they oppose or support these measures, are owed a vote on them, and are owed an explanation for those votes, especially those who  have been touched by gun violence, or who will be.

There will come a time, however, when insisting on a vote will not be enough, and walking the walk will mean telling Harry Reid that he can “take a look at it” all he wants, but if he doesn’t like Senator Dianne Feinstein‘s assault weapons ban, he’s just going to have to vote against it. The President will have to be ready to shame Harry Reid, and Mitch McConnell, and John Boehner, into giving the assault weapons ban an up-or-down vote.

When and if he does, Reid should check out the study that Mayors Against Illegal Guns just put out, which shows that although assault weapons were used in just 28% of U.S. mass shootings since 2009, those shootings resulted in 55% more deaths than those without assault weapons. The next time there’s a mass shooting, someone is going to have to look those people in the eye and explain himself. It can be Harry Reid weakly claiming there just weren’t enough votes, or it can be the people who actually cast those votes.