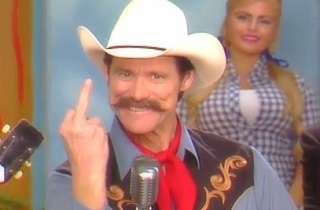 The video itself, released early Monday morning, is as unlikely to dial back the conservative outrage as it is to change any minds, but the real point of the clip seems to be summed up by the freeze-frame above: a deliberately terse gesture of defiance.

“Cold Dead Hand” is full of blunt provocations, from the use of conservative NRA icon Charlton Heston to the trope that gun nuts are compensating for tiny penises. Backed by a three-piece band consisting of gun victims John Lennon, Abraham Lincoln, and Mahatma Ghandi, Carrey’s cowboy crooner taunts Heston on the set of Hee-Haw by explaining that “the angels couldn’t take him up to Heaven as he planned,” because “they couldn’t pry that gun from his cold, dead hand.”

Along the way, Carrey does a decent Charlton Heston, but his Sam Elliott is truly inspired, the sort of semi-obscure impression that gets you major props at the comedian’s cantina. If the bit lacks subtlety, that’s a little like criticizing the sun for shining. This is Jim Carrey we’re talking about.

Carrey does make some worthy points in the song, indicting gun manufacturers for cashing in on “pain and fear,” but the overall effect is pure provocation, and Carrey doesn’t really try to draw a line between the gun nuts who hollered at Newtown parent Neil Heslin, and the more reachable gun owners who overwhelmingly favor universal background checks, and could, maybe, be persuaded to give up Big Gulp ammo drums to save a few lives.

The choice of Charlton Heston as object of mockery is, like most of the video, designed to provoke, and while many will object out of a sense of respect for the dead, I found it problematic for a different reason. I do generally favor respect for the dead, but that rule becomes extremely pliable when it comes to irreverent comedy. Carrey’s treatment of his backing band, while not derisive, also isn’t exactly respectful. In this context, a symbolic figure like Heston isn’t necessarily off-limits.

The reason I think it’s unfair to use Charlton Heston in this way is because it’s not too soon. In the gun debate, the actor is probably best known to current audiences for his turn in Michael Moore’s Bowling For Columbine, in which Moore conducts a really fine interview with Heston, but then concludes the whole thing by cheaply setting Heston up as indifferent to the death of 6 year-old Kayla Rolland. In the interview, Heston tells Moore that he had no idea the girl had been killed when he decided to attend an NRA rally in Flint shortly thereafter, and even concedes that he might not have done it if he had known. Rather than gently encourage some deeper reflection in a clearly-softening Heston, though, Moore tips his hand with a ham-handed demand for an apology.

Heston died in 2008 after a long battle with Alzheimer’s disease, but the Charlton Heston that Michael Moore interviewed, the one who held rallies in the wake of tragedies, lived in a different world. The National Rifle Association that he fronted for was, at that time, in favor of background checks for everyone, and the assault weapons ban that was still the law of the land enjoyed 72% support from Republicans. That Charlton Heston lived in a world in which the 20 children who lost their lives in December hadn’t even been born yet; they were still just dreams in the hearts of their future parents.

It’s entirely possible that Charlton Heston would have been unmoved by that shattering tragedy, but it is far from a certainty. It’s true that Columbine didn’t change him, but Columbine didn’t change us either, not enough to do anything, and neither did Tucson, Aurora, Fort Hood, or Oak Creek. Time will tell if Newtown is enough to finally move us to demand change, but we’ll never know if Charlton Heston would have been moved by that horror, and he’s not around to tell us.