John Dickerson’s Face the Nation Interview with Hillary a Disgrace to CBS News; Here’s Why 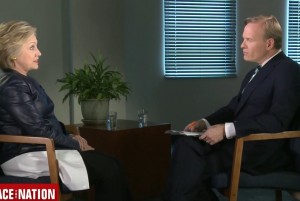 John Dickerson was one of the better moderators we saw during the campaign season. He asked solid questions and follow-up questions, didn’t editorialize and kept the trains running on time with multiple candidates to juggle. This space gave him an ‘A’ for the way he handled a Democratic presidential debate back in December.

But an interview with Hillary Clinton that was broadcast this morning on CBS’ Face the Nation was not only profoundly disappointing, but even disgraceful… particularly for someone as seasoned as the 47-year-old CBS political director and host. Never have there been so many questions to a presumptive presidential nominee that were so unfocused, so tilted, so teed-up, so non-probing than whatever that was Dickerson served up during his long sit-down this morning.

Here are a few examples, with the first being one of the most insulting questions I’ve seen a journalist ask a candidate when it comes to media coverage in recent memory (emphasis mine):

Wait. Whoa. What? Did a major network host and political director just ask a likely presidential nominee what the media should be asking her competition? Is it Mother’s Day or April Fools’ Day?

No matter. Trump has done plenty of interviews with Dickerson and – if an effort to treat both sides equally – was probably asked what he’d like the media to ask Hillary, right? Nope. A check of all transcripts shows no such question was remotely broached. On cue and almost looking gleeful to offered such a gift, Clinton took her cue and listed X, Y, Z around how journalists should do their job when it comes to Trump.

Overall — and this is a stunning result — of the 15 questions asked of Clinton in the edited version, 10 pertained to Trump, including eight of the first nine. Ask about the competition, of course, but two out of every three questions? And by doing so and being so focused on Trump, Dickerson didn’t ask Clinton even one specific policy question from her platform. Not. Even. One… including anything around her plans for a coal mining industry she may or may not help put out of business if elected that made some news this week. Out of 15 questions, could that one have at least made the cut? Of course not. Or how about this very broad question: What do you consider your three biggest accomplishments as Secretary of State? Or… when she comically talked about taking on Wall Street, Dickerson didn’t even attempt to ask a follow-up question around releasing the transcripts of her Goldman Sachs speeches.

CLINTON: We (Bernie Sanders and her) both want to raise the minimum wage. We both understand you have got to rein in bad actors on Wall Street and in corporate America to make sure they don’t wreck Main Street. We have a lot of the same goals. And I hope we can unify around them.

Even Dickerson’s cold open (intro) to the interview was dishonest. From the official transcript:

JOHN DICKERSON, HOST: Today on FACE THE NATION: It’s Donald Trump’s party now. The Republican nominee is set. Hillary Clinton has more work to do, but the battle has begun.

We caught up with the Democratic front-runner on the campaign trail in California and asked about her likely campaign against Donald Trump.

HILLARY RODHAM CLINTON: I’m not going to run an ugly race. I’m going to run a race based on issues. I don’t really feel like I’m running against Donald Trump.

Ok, so Trump is attacking and Hillary isn’t doing likewise according to Dickerson in that cold open, correct? Except he contradicted himself on that front in his very first question during the interview:

DICKERSON: Secretary Clinton, you have said that Donald Trump is a loose cannon. You have said he’s dangerous. Are you suggesting he’s not of sound mind?

Nope. No attacks there… besides the whole “loose cannon” and “dangerous” parts. And that kind of rhetoric from Clinton is to be expected just as it is from Trump. But to portray this as a one-way street leading up to that first contradictory question turned Face the Nation into amateur hour.

One more issue: Dickerson taped the interview with Clinton on Friday. That may have been acceptable in other election cycles, but not this one. News and soundbites are moving far too fast in the age of Trump. So when the presumptive GOP nominee called Clinton an “unbelievably nasty, mean enabler” who “destroyed” the lives of her husband’s mistresses, Dickerson didn’t ask Hillary for a response because he couldn’t without 1.21 gigawatts and a DeLorean. And those tuning in precisely to hear her reaction likely walked away disappointed. Takeaway: Either do the interview live or not at all because of this exact scenario.

John Dickerson interviewed Hillary Clinton this morning, except the conversation was two days ago.

Trump said some things since that should have served as the first question. Instead, we got Mrs. Clinton’s analysis her rival’s mental state.

Eight of the first nine questions weren’t about her. They targeted her competition instead. Not one policy question or clarification was asked.

John Dickerson is a veteran. He’s better than this.