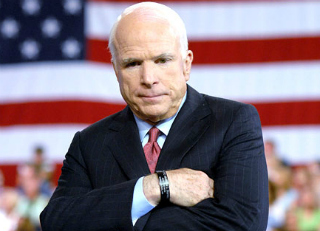 As we previously reported, President Obama‘s campaign released an ad today praising the president for his decision to raid Osama bin Laden‘s compound and suggesting that if Mitt Romney were commander-in-chief, he would not have ordered the very raid that killed bin Laden.

Predictably the ad has ignited a firestorm on the right, with the requisite condemnations of Obama’s “politicization of Osama bin Laden’s death.”

But John McCain takes the cake for the angriest response. In a press statement, he unloads on Obama:

Shame on Barack Obama for diminishing the memory of September 11th and the killing of Osama bin Laden by turning it into a cheap political attack ad. This is the same President who once criticized Hillary Clinton for invoking bin Laden ‘to score political points.’

This is the same President who said, after bin Laden was dead, that we shouldn’t ‘spike the ball’ after the touchdown. And now Barack Obama is not only trying to score political points by invoking Osama bin Laden, he is doing a shameless end-zone dance to help himself get reelected.

McCain then lists the ways he believes President Obama has failed on foreign policy, including “throw[ing] Israel under the bus,” “putting our troops at risk,” and allowing Al Qaeda to make a comeback by pulling out of Iraq.  With a record like that on national security, McCain says:

…it is no wonder why President Obama is shamelessly turning the one decision he got right into a pathetic political act of self-congratulation.

Look, McCain and the right do make a good point that Obama is a hypocrite since he criticized Hillary Clinton for a similar ad in 2008. But let’s face it: nearly all politicians are hypocrites. That’s how the game seems to work; you take your shots while you can, and pray the other side doesn’t catch on to your contradictions.

Hypocrites. All of ’em.